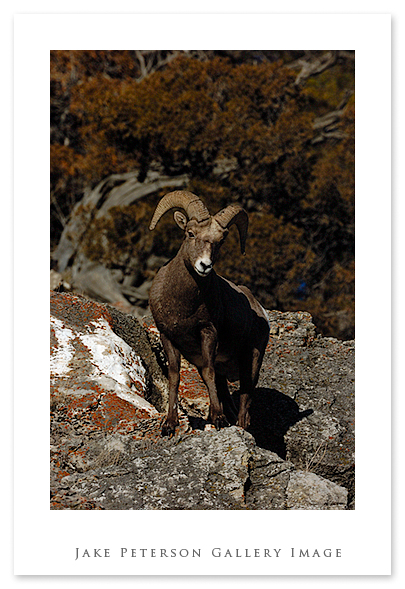 Monday was the last day I could go on the wildlife expedition, for I had to go back to school that night. Instead of going into the park like we had done for the previous two days, we went around Quake Lake and up to BigSky looking for Moose and Bighorn Sheep. The Moose were too far away to doing anything with but the sheep cooperated nicely. The eight rams that we could photograph were all of good size and munched their way up and down the hillside. 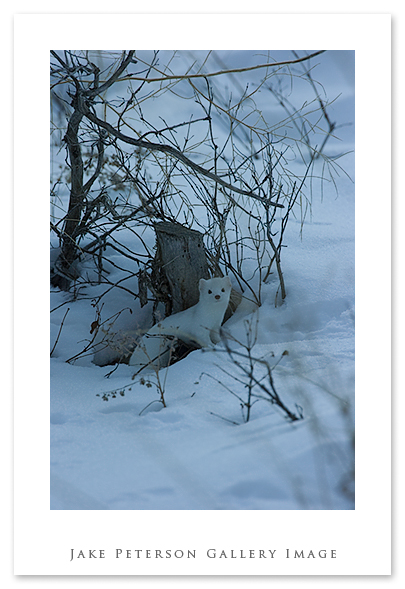 As the day wore on, the light began to fade around four as it normally does in winter in Montana. By five it was gone. The rams had moved back up the hillside and out of range. One Ewe remained down below for us to photograph in the nice light. Suddenly Suzie, our driver for the last two weeks, yes that’s how long shes had to put up with us, pointed with much enthusiasm a weasel that had just poped out. The nine of us quickly turned around on the icy dirt road and pointed our cannons down the slope. This Long Tailed Weasel, which is just amazing, played curious George for maybe 30 minutes with us. He quickly ran out to us, back to his hole and then back to us again. Very lovable little guy but boy he wouldn’t hold still for more than a second. Damn good training on panning but hard to get sharp images. He made a perfect end to a glorious weekend. The guys are lucky and get till Wednesday in the park, while I’m stuck back doing homework, which I’ve put off because I have been playing with my images. So at least I have a good excuse. What wonders will next weekend have, I can’t wait to find out.