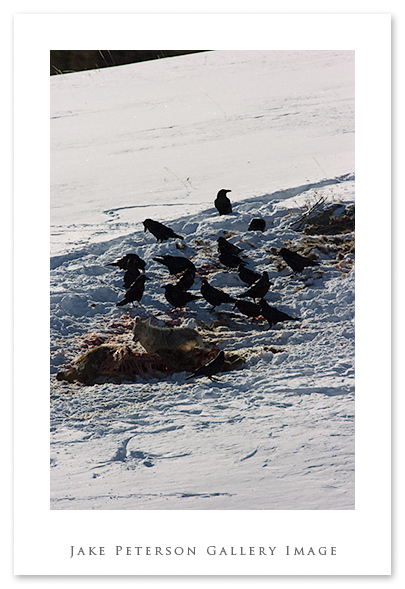 If you have gone to Laurie Excell’s blog then you probably know that the wolves are busy in Yellowstone right now. What you probably don’t know is the story behind that wolf and that kill on the hillside. Before i do let me just say that i realize the image above and below this paragraph completely suck but they were necessary for the story, and thus we begin. Saturday morning was a cool and beautiful day. Blue skies and no clouds made the day just outstanding, and we photographers that filled the park weren’t the only ones that thought so. The true owners of the park were busy. This cow elk was brought down by two individual wolves early that morning. By 8am photographers lined the pullout and the wolves had left. We estimated that the kill happened around 7am but could have very well been earlier. At 10am the wolves came back, one black and one grey same as before, two loners that could be mating since it is mating season and individual wolves go off to form their own packs. By 12 they were gone for the day. Between the wolves, were four Coyotes and four Golden Eagles on the kill at the same time, along with the ravens and magpies. 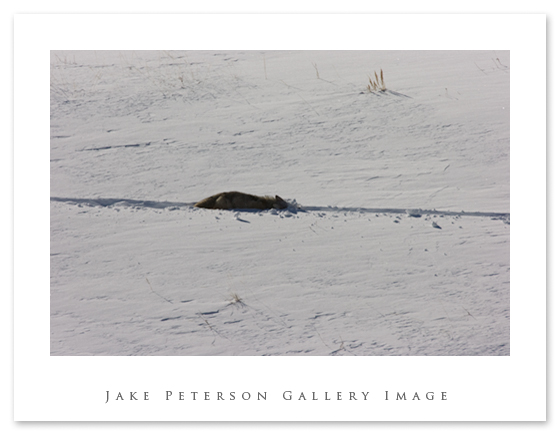 I arrived at 1pm to the site you saw above, the carcass still well intact and the trails beginning to be made. The wolves were gone so were the eagles. All that remained were two coyotes that took turns munching on the elk. One would stay in the shade while the other ate. After a while the one got full and the coyote in the shade would come over. This happened for a while. Now if any of you are pet owners particullary dogs, then you might have noticed that after they get fed they will rub their musles on the ground to clean it. I’ve seen my beagle back home do it all the time. I bring this up because the coyotes after they were done eating, would rub their musles in the snow to get the blood off. This behavior is something that i had never seen them do before. Partly why these images suck is because of the location the sun was to the hill, that and well photographer error. Early morning is fine because the hill is north facing and the sun hits it square on after a few hours of flat light; in the afternoon it sucks because it is back lit. So myself and the thirty or so other people there watching and waiting for the wolves, grumbled as we saw the sun move further and further into an awful spot. The others around me shared with me what had transpired earlier with the wolves, which was nice of them to do. 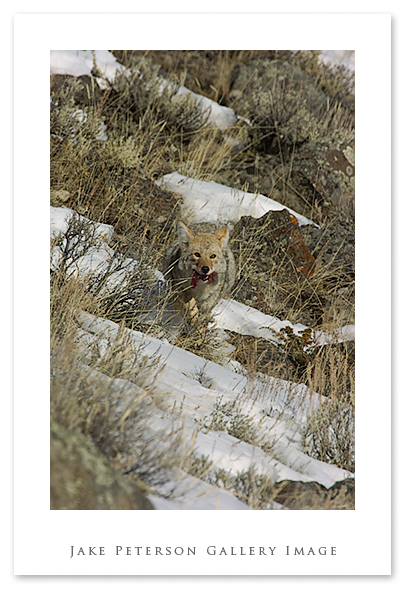 The benefit of the light being at that angle coming over the hill was that it front lit this rock escarpment on the other side of the road. Now you might be asking, well why is that good the carcass is on the other side, did u drag it to the escarpment? Yea most of the people were wanting to, that and sacrifice Dave, but thats not why. One of the coyotes, a female which was made clear after it went to the bathroom on the rocks, scent marking as it were, went form the carcass to the other side of the road. She had a yellow ear tag and a big chunk of elk meat that she was trying to stach. Now i knew they did this but had never seen coyotes get so full on a kill that they were able to stach more for later. As you can see this was one fat coyote. 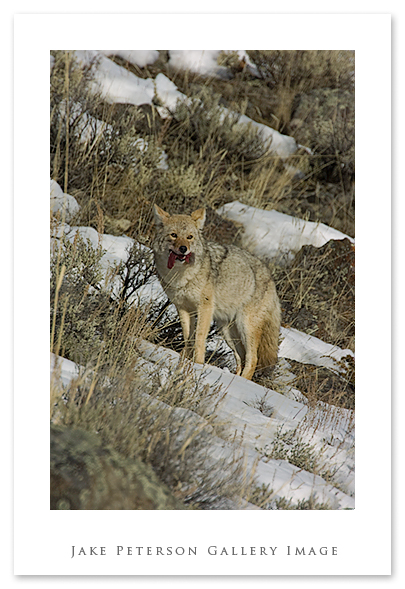 The coyote posed beautifully for a split second before continuing about a mile down the road. Never saw her again. The funny thing was that i was the only one shooting that coyote on the hill, no wolves meant no shutters being fired by anyone else i guess. The second coyote came back to the carcass along with two Golden Eagles that looked rather full before landing and looked even worse after taking off or trying to at least. Finally after four hours of waiting and hearing about it not happening, a ranger came by. All day we lucked out but it had to stop at some point, not really. The ranger was quite laid back and merely said to keep the vehicles off the road which is pretty amazing considering how many vehicles were piled up there. For me that was an exit que, the light was gone, the wolves were gone and the cold was coming in. 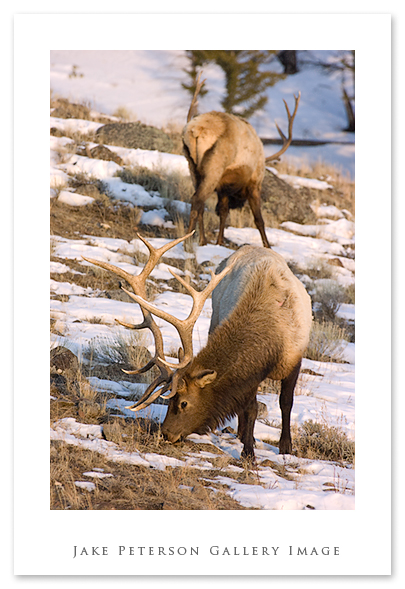 The light was almost gone, maybe 20 minutes left just enough time to find one subject in the gorgeous light. On the way back, just up the road and over the hill from the wolf kill, not quite to Blacktail Ponds yet, were three big Bull Elk on a little hill by the road. The only problem was the nearest pullout was 300 hundred yards away, so i had to walk fast to get to the hill before the light was gone. The same ranger was there watching everyone, making sure no one did anything stupid. Two of the elk moved towards the back of the hill while the last one moved towards us on the road. Everyone started to leave and the ranger offered to give us a ride back to the pullout. So myself and this other guy got in the back where the floor was covered with blood and elk fur, probably from one of the wolf kills from Mammoth the day before or that morning. As we are sitting there ready to go the elk seen here came right up to the truck bed and stuck his head in, it was huge, his head and those antlers just were massive at that range. Of course the both of us are leaning back and im thinking is the ranger on his phone and not seeing this or is this the extended Yellowstone tour. Well i waved and said hi to the elk and he left, and so did we. The drive home was great knowing that i had all those interesting moments to think about, and thats the rest of the story.