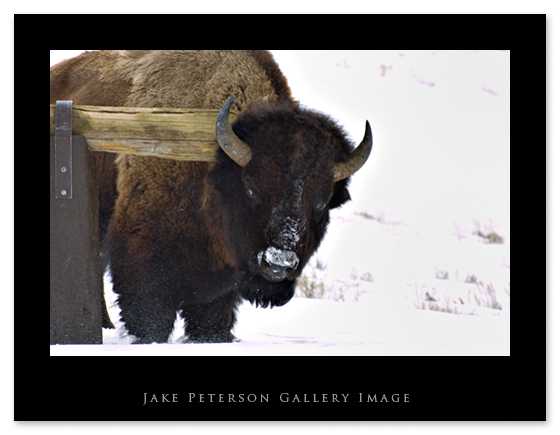 After this past week of not being able to go out shooting, i was thrilled to get out on Saturday. It was a great day to be out. The whole week was cloudy skies and snow, which is great cause we need the snow, but Saturday was blue skies and sun. It was also a lovely 30 degree high with a strong windchill. Down in the park i went, again down the same road I’ve traveled so many times before. Fresh snow covered the landscape. The Elk and the Bison were running around, every group i ran into was on the move, which was odd and added to the eerie feel of complete silence. That feeling started right past Black Tail ponds, i don’t know why but it just felt empty. Maybe everything knew that it was going to get cold so they were hightailing it somewhere warm. The coyotes were prevalent, saw six down in Lamar all at a distance. It wasn’t until the turnout towards the end of the valley that i finally got a shot off. Three Bison were hanging out at the bathrooms, this one above was scratching himself on the hitching post. 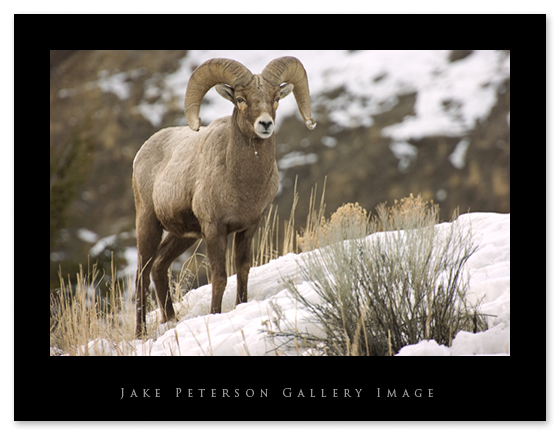 I headed back out of Lamar towards Tower Roosevelt and Mammoth. I didn’t make it too far before seeing something out in the distance. Out towards the frozen river were two wolves hanging out by a clump of trees. They were not doing much, too windy so they laid down. After fifteen minutes or so another two popped out on the hillside behind them and continued north into the treeline where i lost them. A fifth came from the south along the river and traced the river back and forth until it too disappeared in the trees. Finally the two laying down walked back into the treeline and out of sight. They never got close enough to shoot. That was the high of excitement for the afternoon, until i got up over the hill right before ducking into the flats of Black Tail River. There grazing on this little knoll was this very cooperative and gorgeous Bighorn Sheep. He made the day for me. 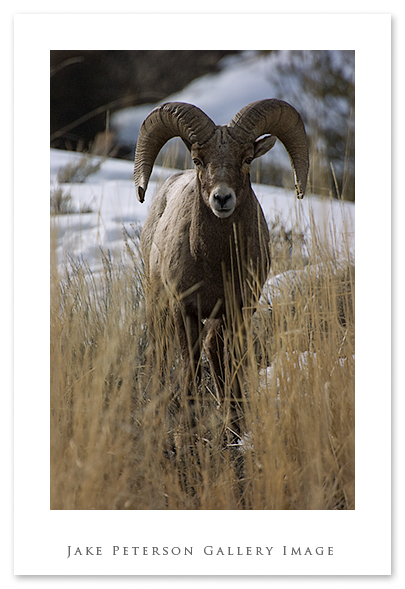 He just paced back and forth and ate while being photographed from every angle by about ten people. He stood in every great spot except at the top of the hill where he would have been front lite with blue sky in the background, the toad. The sun went back and forth from being cooperative to being annoying, which is usual. It kept darting behind the clouds and kept making this guy back lite, but I’m not complaining. 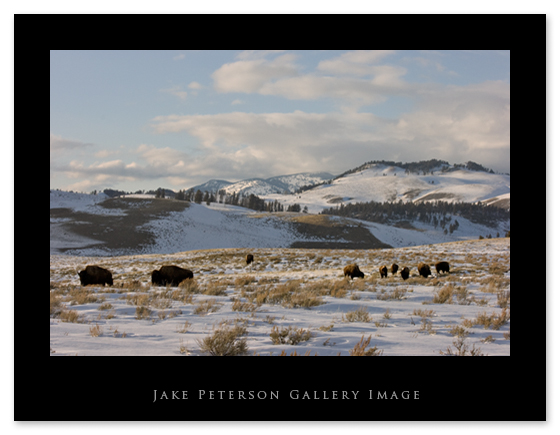 Continuing down the road i past another familiar sight, Bison crossing. This was the sixth time it happened. Couldn’t believe how many Bison jams i got into. Well it worked out, the Bison were moving in from the left and the light was ctaching them just right, along with the snow in the air and the blue sky, so i took a couple shots. Nothing great but gives the true feeling of being in Yellowstone in the winter.