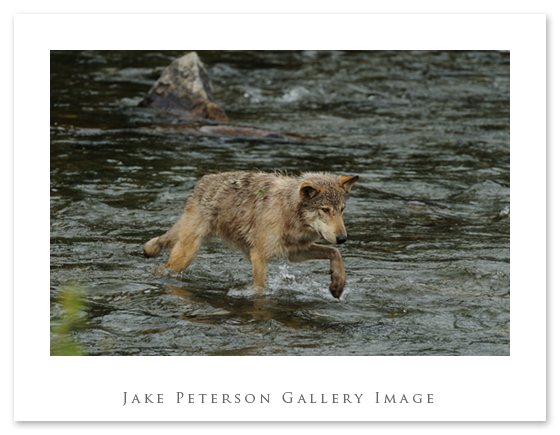 This post will be a little out of order, since we didn’t see these guys until after we were at the platform for 3 hours. BUT i couldn’t wait any longer! These are Gray Wolves, a species that i half been chasing since i got to Montana and have yet to get a decent shot of them in that state. It was a real treat to see him. This a beautiful male and although he looks a little skinny he actually just doesn’t have his winter coat. This particular wolf has a unique history behind him. He has learned how to steal the salmon caught by fisherman as they are brought in. There are signs all over camp warning fisherman to be careful with their catch. Wolves are good scavengers and with fish scraps flowing down the river during the fish run, it’s understandable why they are there with the bears. 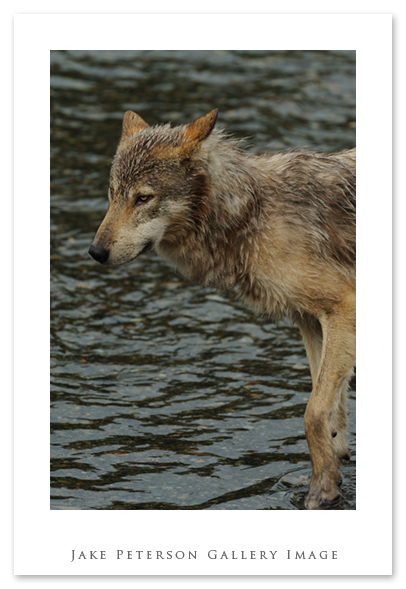 He showed up right before a younger bear, only 8 or 9, caught a fish in the really deep pool below the falls. The bear took his fish to the little island in the middle of the river and ate it with his back to us. Well the wolf walked along the bank on the opposite side of the river, and slowly crossed. We could tell that he knew the layout of the water because he went down to where the water level was low and he could easily get across. As they normally do, the wolf stalked along the back side of the island and moved around to where the bear was eating. He went a little too slowly because the bear finished before he got there. The bear walked away, back to fishing and the wolf slowly came toward us. He came right below us, walked under the platform and off into the forest to our right. That was the first and last time we saw him. Boy was it a great 10 minutes!