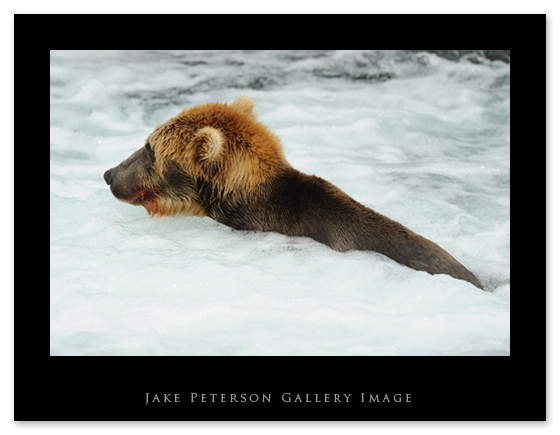 If you have gone to Dad’s blog by now then you probably have realized the five of us are no longer in Alaska and were not this past week. It was two weeks ago that we were there. It was another one of Dad’s pranks on a friend. Our good friend Joe McNally had his lighting workshops at Google then for Kelby. We thought it would be fun to surprise him. But that means for me finishing up this story. I left off on day 4 with the wolves and i thought i should finish up that day and then day 5. A little long to get finished up but necessary i think. Before the one male wolf showed up this guy was fishing in the pool. This swirling white water pool is where they say the best fishing is when the run is slow. There is something beneath them that they sit on and while on whatever it is, a rock most likely, they wait for the fish to bump into them. Once a salmon does they step on it and bring it up to munch on. Sometimes they eat right there, sometimes over to at the island. This one particular bear, probably around 8 or 9, caught 7 fish that day just by sitting there. 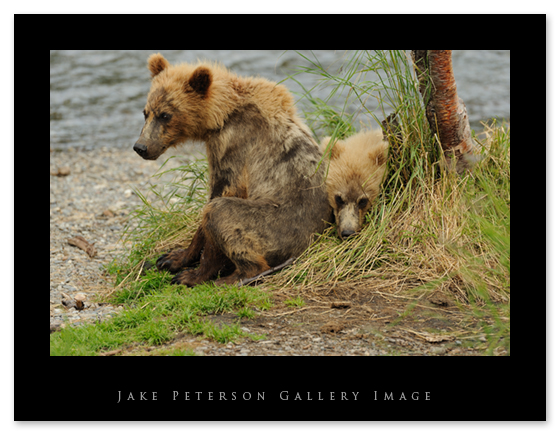 Mom and her cubs were back today, and it sure was a perfect day for them to come back. It was beautiful blue skies and nice clouds. We actually got some very nice light and thankfully the platform wasn’t too busy so we didn’t have to get off for long. She was having one heck of a time trying to catch a fish, jumping around, running and diving. She just couldn’t catch the same break that she got from the previous day. Her cubs were doing what they do best, look cute. The one aggressive kid was out front on a rock watching her, while the other two were sitting in the grass watching. The little one seems to be rather connected to her siblings cuz she always lays either on them or next to them. 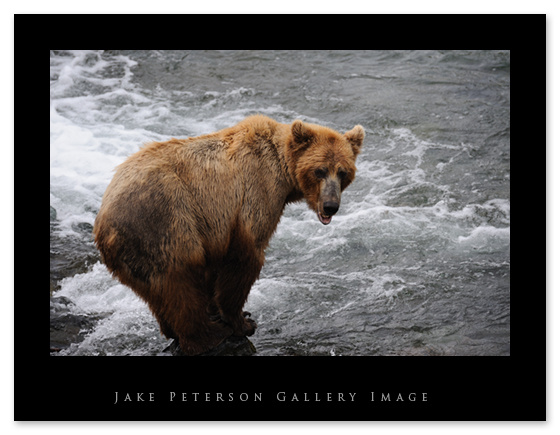 At one point mom was getting kind of frustrated so she stopped and stood on this one little rock above the big pool. It was kind of funny to see this probably eight hundred pound bear standing on this little rock. She even stood up on her hind legs on the rock but didn’t hold for very long. We missed the shot, which sucks but that’s how it goes. I like this one just because she’s looking at the platform, saying “hey where did the salmon go?” 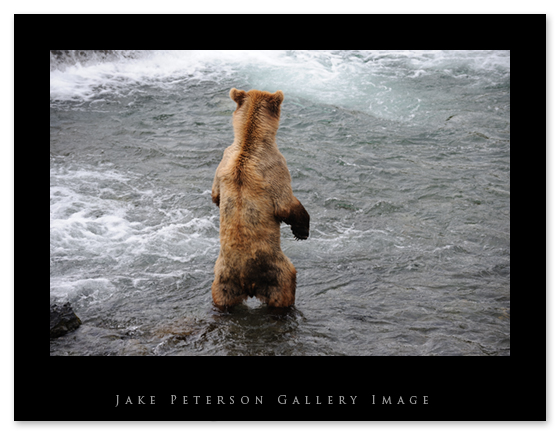 Quite often she would stand up and look around for the fish pools. She even walked while standing up through the water. I thought it would be better not to show the one where she is facing toward us, its not the greatest look. Since she is lactating, her chest is extended. Anyway, mom was pretty determined to get something. We only saw her catch two and she didn’t get to eat much with her little ones around. She sure was entertaining.