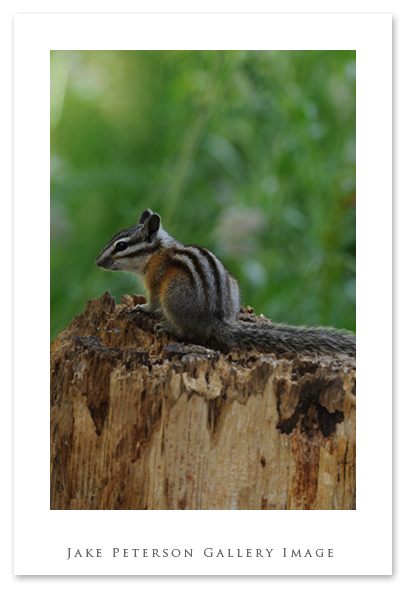 I’m taking a little break from the hummers. My shots are improving as far as direction of the light when photographing them but I’m starting to find a new challenge with background control. The hummers keep landing in places with either to many branches so it looks like there heads are being poked are they are at an angle that just doesn’t. So i thought i would blog again about these guys. They are too are something i’m working with and some improvements have been made since my last post. Last time i used a rock as the center for them to be on. I found out that this wasn’t right. Since most of these guys can be found in the forest in and out of fallen logs, that was the scenario that had to be setup. I looked around the house and with some help from dad we found this one. This stump has more character and works much better when bouncing light off it with a flash. 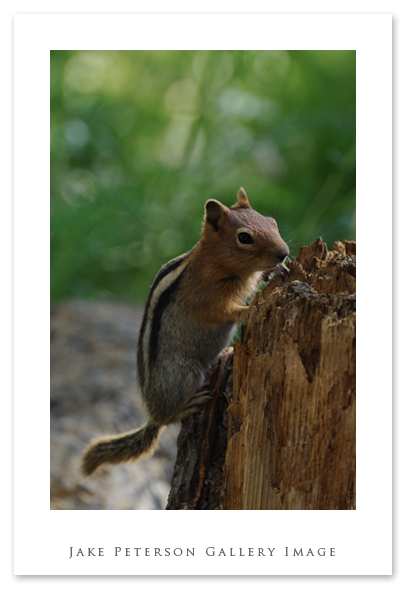 The top shot is of a Panament Chipmunk and the lower is a Golden Mantle Ground Squirrel. Both are kids, they have been in the yard all spring and are funny little guys. Normally i don’t photograph the golden mantle’s because as they age they get fat, go figure that one. It makes them less attractive and just kind of boring. The kids are much thinner and have a better look to them. The trick however to this log is having the seed where you can’t see it. If it’s in the shot then it looks captive or fed. But a good log with holes in it to put the seed in, will mask the attention and it will go unnoticed. This isn’t a new trick, it’s just a good one. The squirrels have no problem getting to the seed and it isn’t in the shot bugging me.