I was out this past weekend in the one place i seem to spend most of my time when not in school. I was down in Yellowstone looking for critters yet again. I wasn’t very smart about it either cuz i got kinda of sleepy and didn’t get up early. This wasn’t a bad thing I just missed the sheep as they normally come down the hill in the morning, and sure enough that was the case cuz i saw them go back up. Fall has taken a backseat to winter at the moment. Fresh snow blanketed the ground everywhere i looked, the roads are already beginning to close. The road to Norris from the North entrance was open so i thought i would go down that way seeing that i hadn’t gone there before this time of the year. The drive down was beautiful, but quiet. The drive back was equally quiet and beautiful. On the way back north i stopped at Sheepeater Cliff, and upon doing so was greeted by a friend. 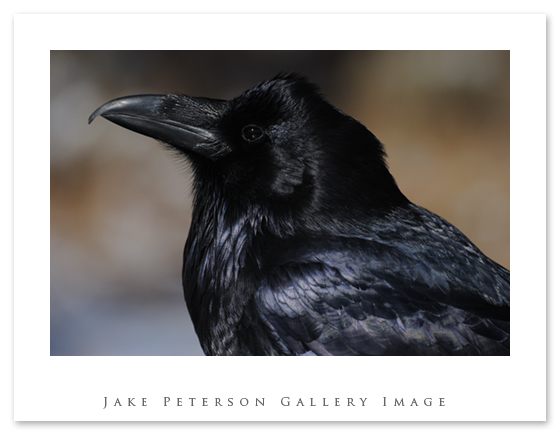 A raven followed me, and flew right at the truck as i parked. He promptly flew up onto the hood of my truck, and decided to beg from the bug guard. It was actually rather amusing to me, i was able to get out of the truck without him budging. With the 70-300 in my hand i decided to take a couple shots, since he was right there and since no one photographs ravens. I like them, they have a great shine to them and a lot of character. He turned out to be quite cooperative and as long as he didn’t scratch up my truck, which he didn’t, i had no problem with him sitting there. In fact he was a better subject the the Kestrel i worked earlier. Those birds hate me, especially this one. I walked up slowly, got into position, did everything i was supposed to when approaching a subject, put my eye to the camera, started to focus and what does he do, he looks right at me and flies away before i get a click off. O that’s infuriating, damn evil bird. You know when they do that it’s on purpose. I guess the raven made up for him. Not the same though.