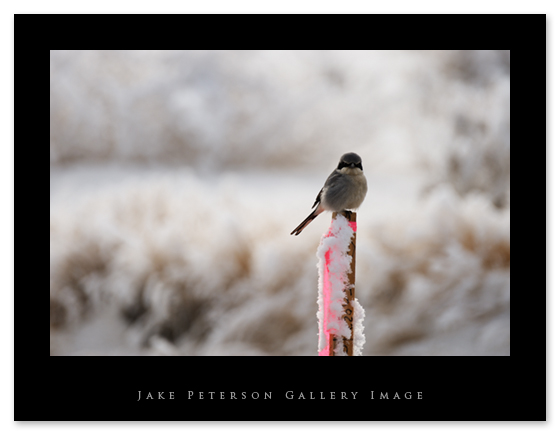 I’m sorry to say that i am a bit behind in my blogging and still trying to get caught up. This past weekend when i was driving home i stopped at one of my favorite haunts, Bear River, and did some shooting. It was great, the weather was its usual greyish sky look but the ground and bushes were just covered with snow and hoarfrost. The raptors were out with full force, i couldn’t go very far without flushing one. Then there was this little guy. Now i knew they were there but i never had seen one before and had definitely never gotten glass on them before. This is a Northern Shrike, a really cool little bird that is wicked fast and damn sweet to photograph. They have a curved tip on there bill which is perfect for small insects. This particular one was doing a great job of pissing me off by landing on these poles with pink ribbons tied on them. I’m guessing it was a female shrike by this behavior. She made me go back and forth with the truck, window down 600 hanging out in order to get the shot. Unfortunately i never did get any shot with the 600. This was the 70-300. I know it’s not a great shot but hey that’s half the fun, i still felt like sharing, still a great bird to add to my files. Better yet it gives me another reason to go back to the refuge.