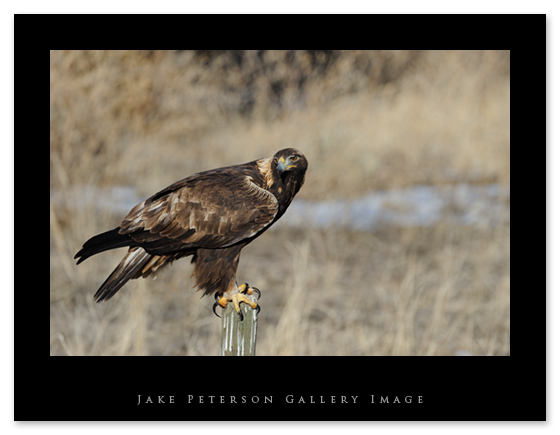 This guy really is just too big for his post, but then Golden Eagles are just giant raptors. Like most raptors, they are very good at finding road kill, like deer that have been hit by cars. Well I’ll bet you can guess where i found this guy. Yep, in the worst place possible, where else. It was a deer carcass by a windy road, in the middle of a canyon, that was a 50 zone, what better place could you ask for to find a Golden Eagle. You’re probably wondering why i even bothered. Well after all the eagles i have seen and tried to photograph in Yellowstone on Elk carcass’s, having one that was six feet away with no one around and a turn out sounded like fun. Plus, i was out to shoot that day, why not. He didn’t stick on the carcass long before hoping onto this post, which was better for me, because it gave a much better background. Yea i know it’s an ugly brown grass background but that’s kinda where they spend half their time foraging so it’s part of their biology. I only got a couple dozen clicks before the inevitable car came from behind but it was fun while it lasted. I thought it best to continue on down the road and leave him to his afternoon meal.