A question that i seem to get a lot is whether I go for just the big sales or do i go for the little ones too? With that i want to tie in whether or not it’s wise to give away free images because I think the premise can go with both. MY answer is always if I get something out of the deal than it’s worth while. Photographers tend to overlook the little guys and they need the images just as badly as big magazine names. What most people don’t understand is those little ones because they get looked over, it’s an easier sell. While it does take more magazines to make a big payday out of little sells, it still adds up. 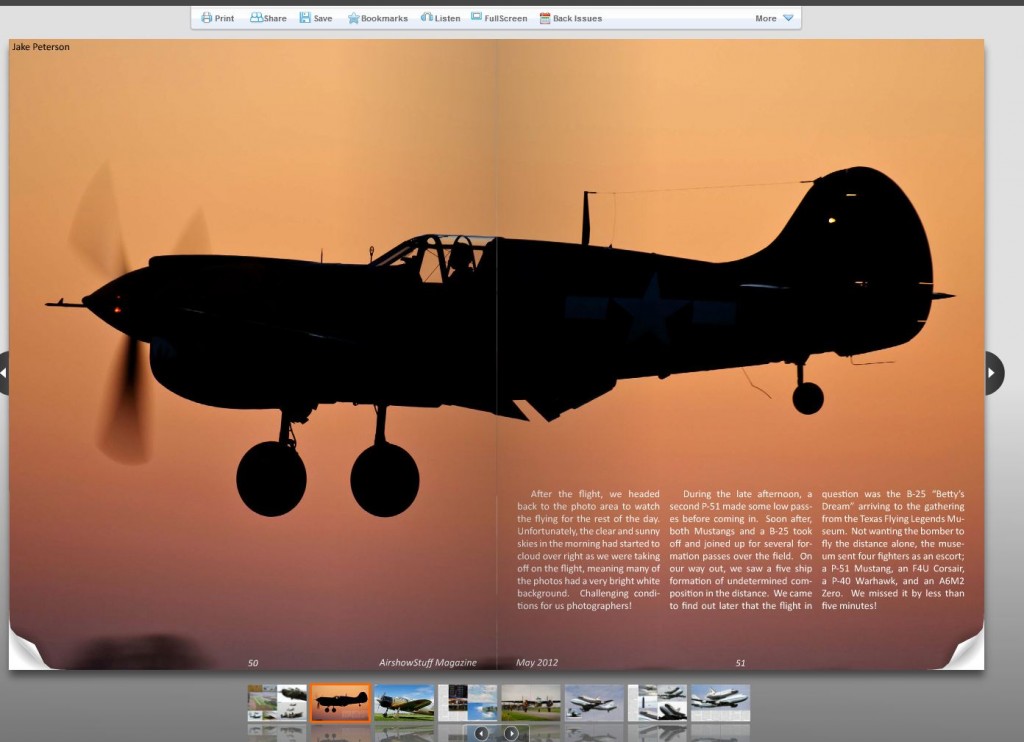 As far as selling images for free. Well I’ve heard way too many people that say “Never!” Think about that though. You have images on a hard drive that aren’t selling because you are waiting for a big pay day. That means that all those mathematical equations, that’s what a digital image is, that you spent money on are doing nothing. How will you get people to see them? To me it doesn’t make sense. If you work with a magazine that doesn’t pay but has a large distribution, than people are going to see your images and more work will come from it. It’s chance, no argument, but it’s better than just sitting on a hard drive.

The screen capture above is a perfect example. This is a capture from AirShow Stuff Magazine. A free online publications that’s only benefit to photographers is media credentials, which given the venue is actually pretty darn nice, but that’s for a another blog post. If you click on “view issue online” and scroll through you will see my images. While this magazine used a lot of images for free, the amount of feedback already more than makes up for it. Especially combined with the two other magazines I submitted to for the same event. Different photos of course. The bottom line comes down to if you are willing to work, which in the field of photography you better be or else you won’t last, all those little pay days and no pay days do add up. You never know who will see your image, where editors will be in ten years maybe somewhere else and they remember you, and you never know who you impress. Work with wherever you can and work towards the big ones. It all adds up.