Maybe it’s because I’m reading books on Corsair’s at the moment or perhaps I really did a poor job with this plane when I first photographed it but this is the second image of this Corsair that I used as an example on post processing. I don’t really mind because I love the plane and after reading more about it’s service history, I love it even more. The first time I brought up the subject of reprocessing an old image it was about one of my favorite images that I liked but I didn’t do a good enough job in post. You can see the difference here in this previous post. Well as I was working on some routine Gallery maintenance this past weekend I stumbled onto this photograph. This was taken back in June of 2009 at my first aviation event. As you can see below, things were a bit different then. 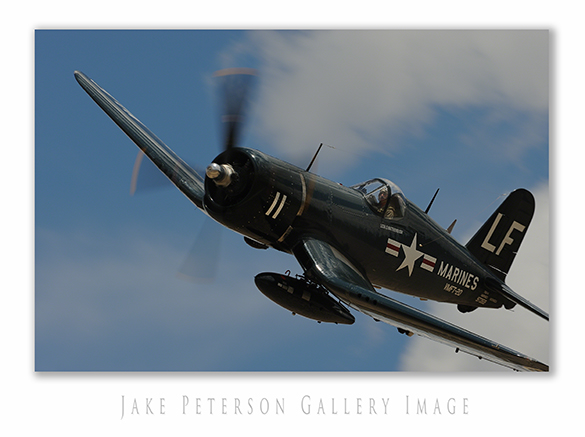 The funny thing about this image, besides how I processed it, was the drop tank. I distinctly remember everyone hating the drop tank when we were photographing the plane. It wasn’t symmetrical, why was there only one, why is he flying with it on? These were the questions everyone was saying. Well having read more about the plane and it’s history, specifically between late 1943-44, the F4U-1D’s and later models started using 1000lbs bombs as they slowly got integrated into becoming a fighter-bomber. It’s actually a really cool history of how they became a multipurpose plane in a very short time, but more on that in another blog post. 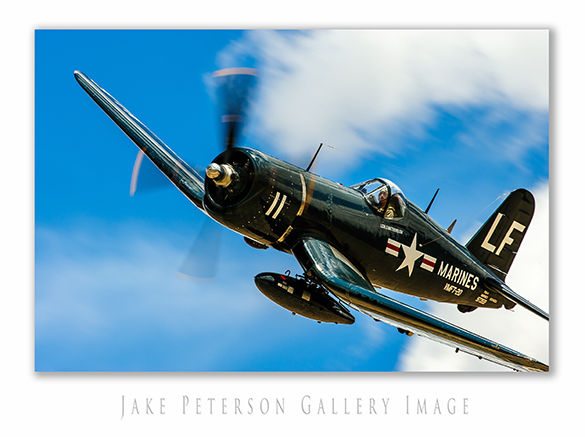 Both of these images were finished on different computers and with very different profiled monitors. The top image was processed as a nef file in Capture NX2 and then Photoshop CS4. The bottom one is a nef in Adobe Camera Raw and then CS6. As it is apparent they are very different. Granted at the time the top looked better because of the profile, but as I have learned profiles change as the viewing platform improves. So the question remains is it wise to reprocess an old image? Well here is the answer I have come up with so far. This photograph shows a Corsair with a drop tank. Usually these aircraft don’t fly with drop tanks, reproduction bombs or missiles, or anything exterior that has the chance of falling off. It’s potentially dangerous and causes drag on the aircraft. Not to mention those esthetic details cost a lot of money to include. For me having an image in my files that shows this stage of what the plane used to be flown as is really cool history. The bottom line is, if the subject matter is part of the story that you need told then yes it is worthwhile to go over it again, provided you go from the original file and not what you previously have done. This doesn’t mean going back over every image just because of a new technique, just the ones that are needed or desired.