Bunnies weren’t the only thing I was playing with when I was out, this little guy was around too. This Yellow-pine Chipmunk I actually walked right past because he was in a tree that I wasn’t expecting him to be in. He was actually down slope and was quite challenging to photograph. For one thing I had to look down at the tree so that there was something dark behind the bright branches, the sky would have just made hot spots and a silhouette of the chipmunk. The second thing is Chipmunks don’t hold still! They bounce all over the place. Which is partially why they drive the dogs back home nuts. 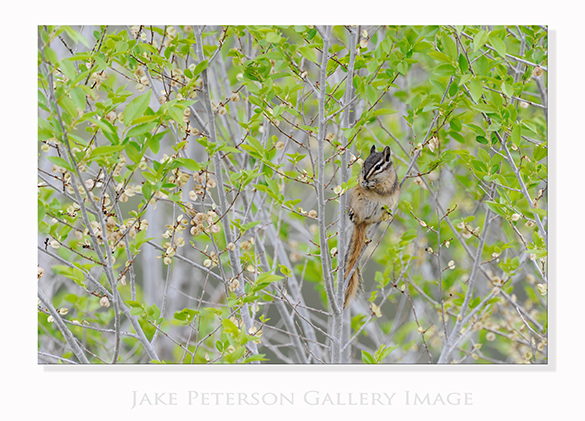 Well as you can see this little guy was just doing his thing collecting seeds from this Cottonwood Tree, filling up his pouches. There was never a clean shot but that’s okay, this isn’t meant as a portrait shot, it’s biology. This is what they do when they aren’t at a bird feeder. Knowing that the only goal was to get the eyes sharp. The eyes let us connect with the species no matter what species it is. After that it’s just a matter of finding that right angle that brings in just a little bit more of the story, and in this case filling up the face.