I went out for an evening movie with my roommate this past weekend and when I stepped out of the theater around 8:15 I was instant caught by the dramatic light. It hadn’t been raining before I entered but afterward the drama in the sky was great. I quickly got drove home, grabbed the cameras and went storm chasing. The first thing that caught my eye was the light catching on the rain as it was coming down. I lucked out and found a good barn to put with clouds. Always feels like Murphy’s law when great light appears and there is no subject to put with it. One of the joys of living in Gallatin Valley is that it is a valley. We are surrounded by mountains and in the middle is farmland and ranches. When those moments occur the valley lights up and capture is unique. 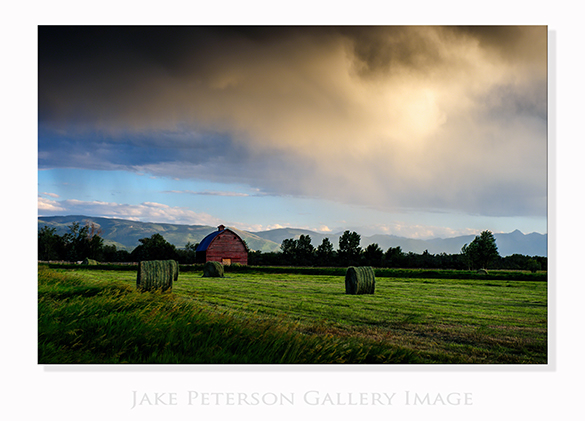 I had stopped by the side of the road to photograph the barn but on the other side the light was telling a different story. This group of Cottonwoods was not lighting up the same as the barn but in the distance a faint amount of light was still on the Bridger’s. These images were simple captures with a D3, 24-70 and good light.