Some might argue that the real west is represented with the men and women that settled it and those generations that carry on that tradition today. I would tend to agree with them but I don’t know enough cowgirls to go out shooting with at the last minute when the clouds appear. Another project to work on. I always found that the old structures, the ghost towns, mills, mining camps and especially barns say a lot about history. The shear fact that they have survived the test of time for so many decades amazes me. That’s probably why I actually go searching for them and make mental notes whenever I find one I like. This particular one is a favorite! 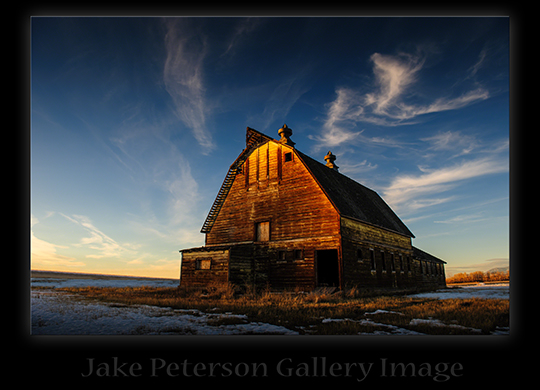 This barn stands on the northwest corner of town surrounded by other buildings, so yes I did do some post work to bring out the majesty of this old building. Oddly enough though it does rest in a bowl so the land curves around it like that. Barns are great to photograph because there are so many ways you can light them! You can add a person, highlight a detail in the door, window or wood, focus on just one section, light paint them or even make them black and white. Rustic buildings are great black and white subjects because of all the contrast that comes out in the wood when converted. Using a D3 and 24-70 AF-S f/2.8, I kept it simple last night using the natural fading light on the front, contrasted against the shadow of the back. Considering it was a bald sky morning, I was happy to see those puffs float in to break up the sky.