What is flight? Flight is the world between heaven and earth that houses many beautiful creatures that soar around looking down on the world. Birds naturally start flying at an early age, instinctively as their biology tells them to. For humans that were never designed to fly, physically or mentally, it has been one of the greatest challenges to overcome in the past hundred years. For some flight is just a way to travel from one destination to another, but for others it is a way of life. A life that many consider to be truly free. A last reach to the stars. Our jobs as photographers has always and will always be to capture stories, so that there will always be a record of what happened. There is no easy path in any field of photography but when it comes to machines that have no smile, no eyes and no voice, bringing out the life in each plane can be a real challenge. It’s the challenge of bringing Romance to Flight. 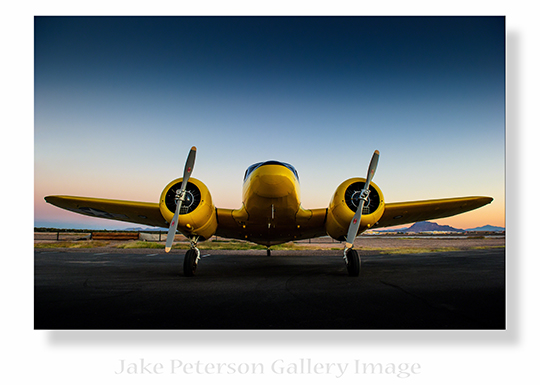 No matter what plane it is the core elements are always there. The fuselage, the nose, the wings and the tail. Each plane has one of these things, if not more, and often the story comes down to how the details in each of these areas makes the plane what it is. In a way every plane has its own characteristics which make it unique. Sometimes with a flashy paint job or a colorful past, but no matter what it is none of it matters if it doesn’t come out in the photograph. Take this AT-17 Bobcat/ T-50 for instance, or otherwise known as a Bamboo Bomber, photographed down at CAF Mesa with a 24-70 f/2.8. This uncommon plane was first built in 1939 as a military trainer to help students get used to a multi engine aircraft. It later branched into the commercial world as the T-50. Over 5,400 of these planes were built and although it’s not a rare plane it certainly isn’t common either. With it’s rounded wings and bulbous nose getting low and shooting up against the Arizona sunrise brings out the radiance of the yellow paint job as well as the structural simplicity. 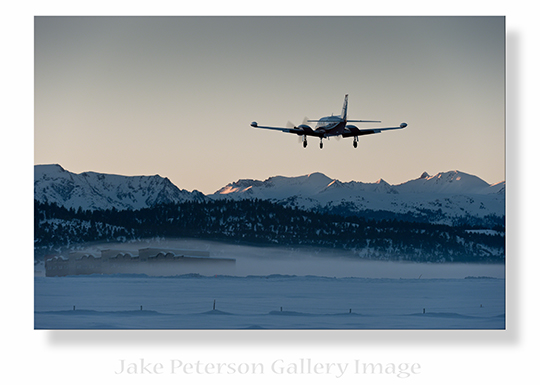 Being old isn’t the only way to have character, although more and more character does seem to come out as one gets older. It can be something as simple as the destination that tells the story, and we all know that the best destination is seen in the background. This Piper Turbo Prop is flying into this frozen airport at my home town at Mammoth Lakes. Dad and I raced down there one evening before dinner. Armed with a 200-400 VRII and D3 we waited along an old stretch of highway as the plane came in. Thankfully since we had no sunset, and the plane was late, we had a low fog come through to give an eerie wintery mountains feel to the scene. What that family was planning to do that weekend I don’t know but imagine ski’s were involved. 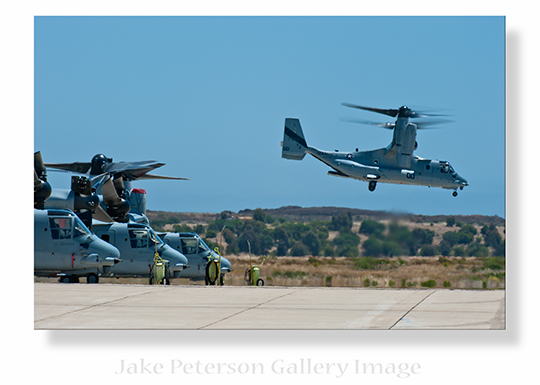 I’m often reminded of how easy it feels to bring out the “majesty” of these vintage planes and how much harder it is with more modern aircraft. The only reason it feels that way is because most of these old planes already have a history to them, it’s just a matter of bringing that back to life. For newer planes where the history isn’t written yet it’s about finding ways of showing how technology has progressed. Like these V-22 Osprey’s down at Miramar. There was at least a half dozen lined up going over this little hill, all looking the exact same. The one on the end kept coming and going on maneuvers as it was scheduled. Probably one of the most amazing technological achievements, this tiltrotor airplane breaks the laws of physics letting us not only fly but hover in the air. 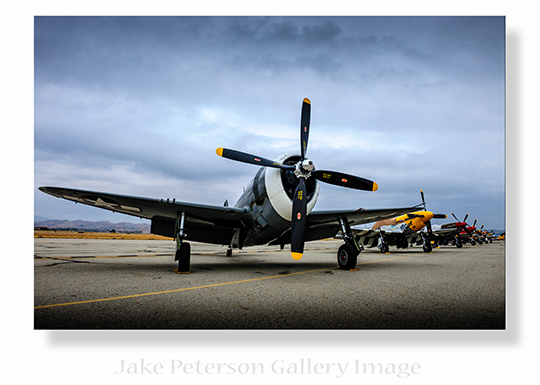 On the rare ocasions when there isn’t just one aircraft out front but a whole line of planes as far as the eye can see, that’s when the pixels must really fly. There is nothing like having a squadron at the ready. 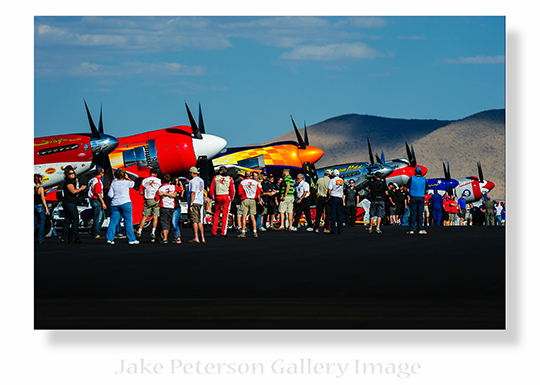 Sometimes that squadron is a dozen warbirds from various collections and museums, and other times its a line of racers getting ready to go out for that last race of the year. With a 70-200 VRII and lots of depth of field, bringing out that first plane can be just as important as that last one. It’s all about the story and finding those shots where you can see down that line of planes and it’s perfect, are far and few! 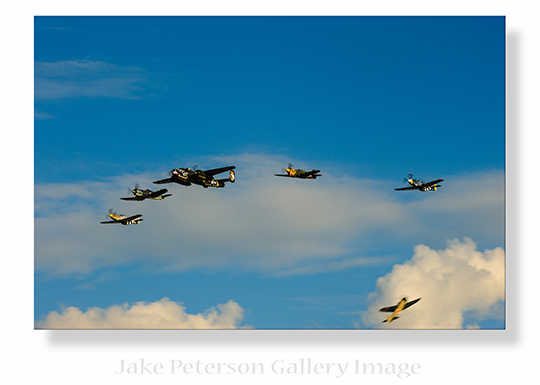 It doesn’t take long before you realize that there is more to this whole plane thing then just the planes. As I’ve talked about before it’s about the people behind the planes. It is amazing how much aviation touches our daily lives and how few people know about it. Then again it’s also amazing how some people dedicate their lives to making sure that everyone has the opportunity to learn about these aircraft. Taking the Texas Flying Legends out of Houston, TX. Their mission is to educate while honoring all veterans and preserving their stories. Their credo says it all, sacrifice above self. Their beliefs don’t just extend in what they do on the ground but in the air as well, as they are constantly preforming, critiquing and improving their aerial demonstration. 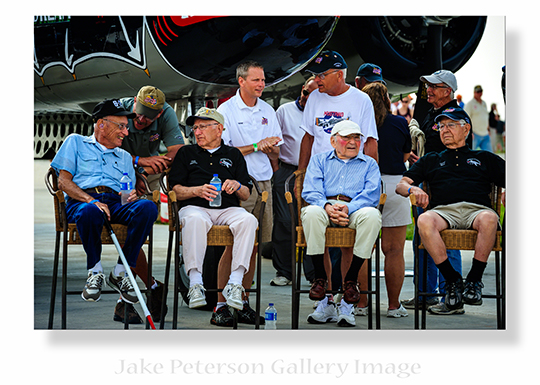 Back on the ground it’s right back to whats really important, the vets. It’s important not just for today’s pilots but for everyone to get involved and talk with veterans. They’re stories are unbelievable and most are willing to share those stories if you just sit and talk with them. When they know you aren’t just there for an autograph and that you truly care, the world can open up. 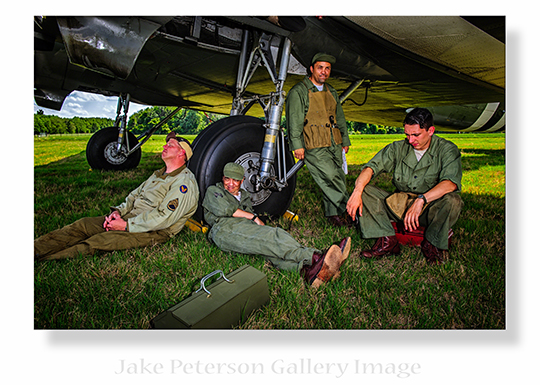 It doesn’t just end with the vets. The pilots, the volunteers, the mechanics, the staff even the reenactors they all have their stories to tell and enjoy just being around the planes. For most it’s not about the money it’s about shear enjoyment. It truly is a great feeling to just spend a day under the wing of a plane and watch the world go by. Even for some greased up mechanics working on a C-53 after a long flight, under that blue sky and on top of that green grass, everything is at peace. 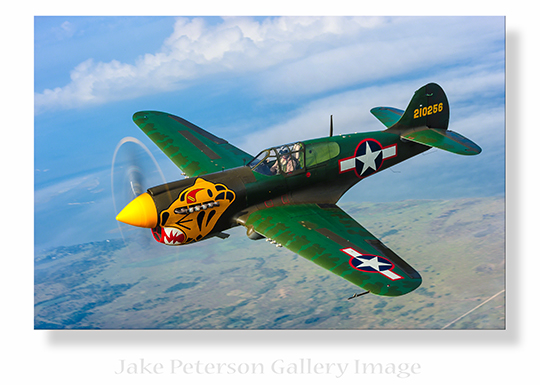 It’s about the people and just showing an interest that great things can happen. Well if that’s not a reward enough it can lead to great things like flying over Galveston Bay with millions of dollars of warbirds. This P-40 Warhawk, Aleutian Tiger, is a great example of just this. Dad and I got to work with the Texas Legends for one reason, we talked, we showed up and we kept our promises to help. That was all. Always remember that last part. 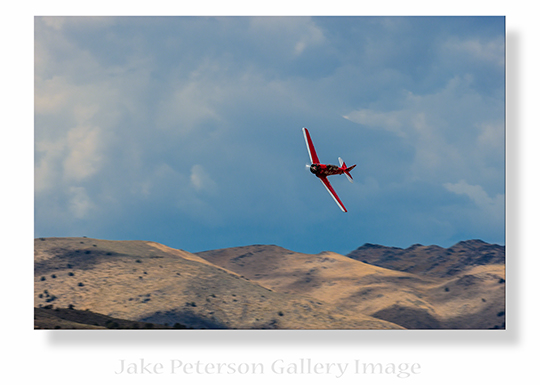 I know everyone wants to hear some super secret awesome way to get marvelous shots of airplanes no matter what the subject, what the background is and what the light is, but the truth is there is no secret. Everything still comes down to the basic fundamentals of photography. Good light, interesting background or with planes a clean background, good panning, and the subject needs to be sharp. The only trick, if that is what you want to call it, is applying the physics of the rotating prop to an appropriate shutter speed. Slower shutter speed shows more blur in the props, it’s best to shoot in shutter priority to get this result. How far down you go is up to your panning abilities but that’s all it takes. After that the rest comes down to your own personal taste and creativity. Post processing falls into both of those last two categories. I will say watch out for dust, it’s a pain in the butt. 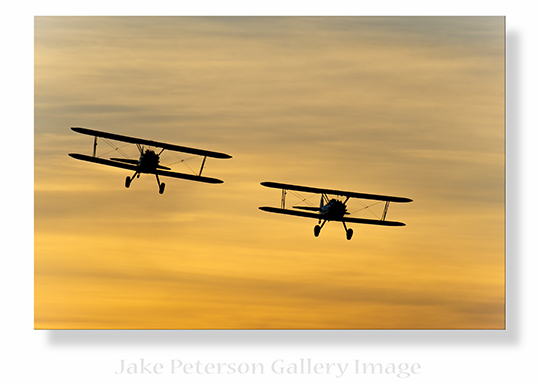 In the end it all comes down to what’s pleasing to the eye. Making these machines into individuals with their own characteristics makes the best shots. Every pilot knows when they step into a plane that each one has it’s own quarks, we just need to show that in our images. Flight began as a romantic notion of touching the stars and proving that man can do anything that he sets his mind to, even defying our physiological nature. As long as that notion is in your heart when you photograph these planes then it will show in your photographs.