Over the last couple of years I have had the great joy of being able to fly with other aircraft. It truly can be described as an adrenaline rush. One thing I’ve learned through painful trial and error is to keep cool and think through everything that is going on during the flight. This really is important in order to see all those other shots that might be possible. In this case, while flying in a TBM Avenger with a corsair on the wing, it’s very easy to be only concerned with the corsair and not see the big picture. TBM’s were designed as a torpdeo bomber that was vulnerable against enemy fighters. They needed top cover from our fighters to get in and out of enemy territory. The corsair was a carrier and land based fighter that was primarily involved with providing that cover. In formation flying getting the shots of the corsair is important but finding time to get shots with both planes is essential. Using a 16mm fisheye I was able to get most of the plane, wing and everything outside the TBM. 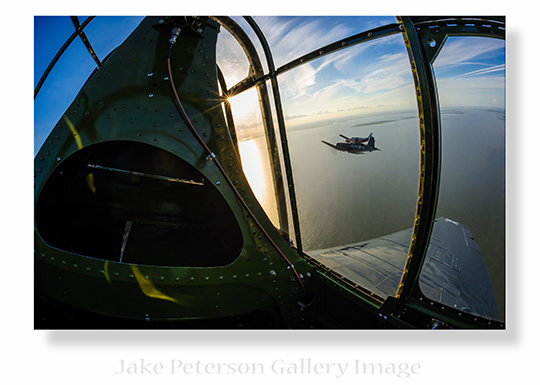 Fisheye’s really are a great lens to bring along when photographing planes and you’re in a small cabin. The give the feeling of a lot of space when there isn’t any. Plus because of the curvature of the glass it also creates that nice curvature to the earth which really gives a nice feeling to how the planes relate to the ground.