The whole theme of this years show was solute to the Mighty Eighth. The Eighth Air Force based out of several bases throughout England were responsible for breaking German manufacturing throughout WWII. The Eighth, although not the first to commit to daylight bombing operations, were the first to make daylight bombing raids effective. The British had tried daylight bombing and found that the losses were too great for the reward. With the need to keep planes in the sky over the enemy the British switched to night time bombing raids. Many considered this to be the best way to fight for night time bombing greatly reduced the risk for the bombers as they did not have to deal with enemy fighters. However, accuracy dropped during such raids so the USAAF, through much debate, stuck to daylight bombing. The main aircraft for such roles was the B-17 Flying Fortress.

You can’t have a solute to the Eighth without these big birds and as luck would have it two showed. The B-17G Flying Fortress Sentimental Journey out of CAF Airbase Arizona and the B-17G Flying Fortress Fuddy Duddy out of Lyon Air Museum were at the Planes of Fame for the Airshow. Both days included a time slot where planes from the European theater flew. Besides the B-17’s, P-51’s, P-47’s, a P-63, a P-40 and even a Focke Wulf were up in the sky at once. It was pretty darn impressive to see how many planes were up in the sky. In total 52 warbirds were at the show. 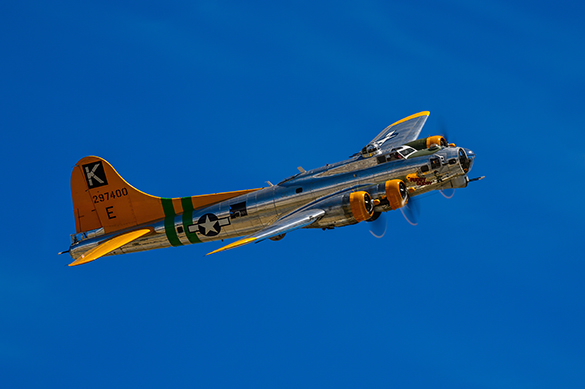 All of this was shot with a handheld D4, 200-400 VR and a SunSniper Strap. One thing to really notice and watch for when photographing planes with polished aluminum fuselages is how the light changes on such a surface and where the shadows are. Both of these planes have a polished fuselage and during the panning of the plane there was a time when you could see the light not curve around the plane but streaked across it which wasn’t as pleasant. When the skies are filled with planes and you don’t want to waste an opportunity training your eyes to know when to click and when not to is can really make a difference. 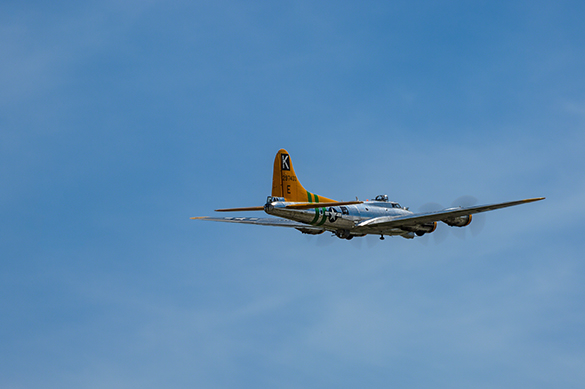