The constant challenge when it comes to air to air photography is never finding a subject, plenty of pilots want to go fly, but rather finding the right photo platform to use for the photo mission. There are many good aircraft that can be used but of the best is also one of the hardest to get a hold of. The North American built OV-10 Bronco was developed in the 1960’s as a turboprop light attack and observation platform. It’s first flight was today fifty nine years ago. It was designed to be used practically anywhere. With a short takeoff and landing ability and a rugged, easily repairable design, this plane was built to land on a carrier, a beach, a jungle or even a country road. It had enough fuel, with external tanks, for 5 1/2 hours of flight time. It’s underbelly was built to carry a multitude of weapon payload allowing for multipurpose operations during Vietnam. The one set back to the aircraft was it’s lack of power when at max weight. Pilots often struggled to climb when loaded down. 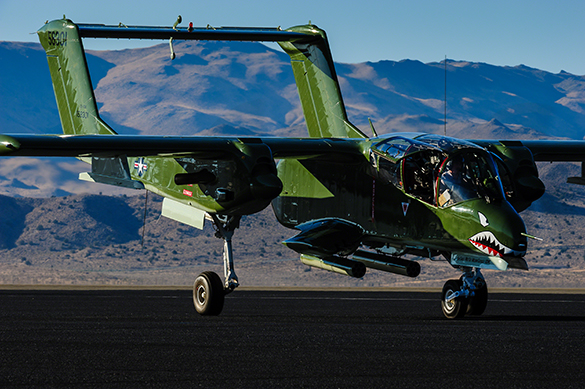 It’s unique abilities did not included when built it’s versatility as an air to air platform, if one could be found. The back hatches can be popped off allowing for a clear field of vision, without heat exhaust from the engines behind the aircraft. Fifty nine years ago this wasn’t the intent when the plane first flew, but as history has shown us not everything is used for its designated purpose.