Every year around the first or second week of September we have our first snow fall of the year. The temps drop and we start getting that feeling that Fall is here and Winter is on the way. Last year at this time I was driving down to the Reno Air Races the same day the temps drop and I happened to come across a pack of wolves near West Yellowstone. This time I had to suffer through a nice sunset on the Bridger Mountains at the tail end of the storm. 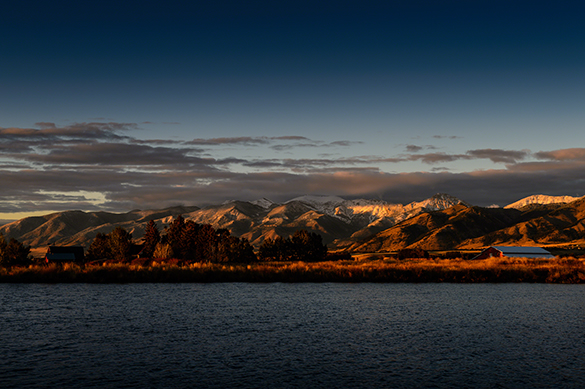 I went to a spot that I had driven by a number of times but had never stopped. It’s just a little pond with a nice view. As you can see there weren’t many clouds left and there also wasn’t any reflection but I took the shot anyways. I thought at the time that it didn’t quite give the right feel and once I got back to the computer, I was right. But it did bring up this good lesson. Shooting with the D4 and 24-70 AF-S f/2.8 I was able to capture a lot of the Bridger Mountains but I wasn’t capturing the awww of the mountains. The water and the blue sky acted as just space fillers taking up at least 60% of this photograph and adding nothing but blue color bars. The end result is this very small feeling which don’t work for me. 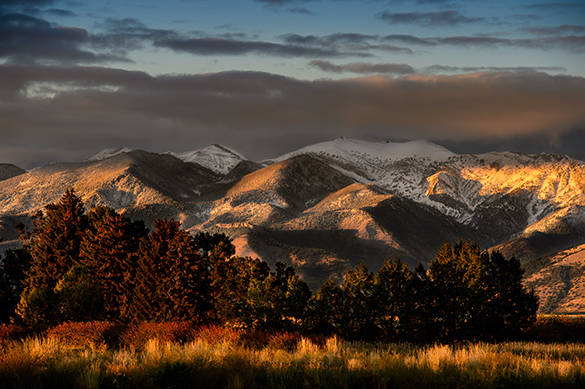 So I switched over to the 70-200 VRII and went for those close up detail shots of the light as it made it’s way over the mountains. I even went so far in a couple instances to go into high speed crop to really isolate some of those areas. What was the result? A stronger composition with more of a story being told. Now the image says there is warmth to this cold mountainside and I can attest to that 41 degrees with having to wear gloves in order to keep the camera steady. The lesson to take away from all of this is just because you can go wide, or have a body of water to stick in the foreground, that doesn’t mean it will create a stronger image. Change your perspective and go for those spots inside the whole scenario and bring out those hidden gems.