I see many odd things on my travels. Sometimes there is an explanation and other times I’m left scratching my head. Well this was one of those times I was scratching my head. I was out shooting on a familiar route and for some reason I noticed this boat at the end of a field with nothing around it. It wasn’t like next to a barn or house or something. There was nothing around it and it had obviously been there for a while. It was kind of odd. 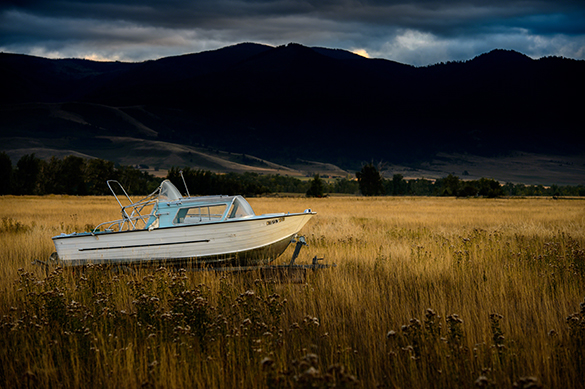 I looked at this old boat for a couple minutes and it struck me, this is kind of cool. There is a lot of water activity up here in the north during the summer months but most of it is with modern craft. You don’t see old boats like this that often in Montana. Now I’m not a boat expert so I won’t even begin to say what this is or how old it is, but it’s old enough that it has character. With the D4 and 70-200 VRII it was really just a point and click. The nice golden light moving across the field really helped to make this boat just pop. Simple and bizarre works.