I love when I can recreate history. Being around these amazing planes always brings back feelings of the olden days where Aviation was the pinnacle of technology. Of course most of the images we see back then are in black and white and so naturally why not carry on that tradition. One of the rarest WWII planes is the ME 262. It’s rare in part because not many were made and then not many survived. It’s also an extremely temperamental plane to fly on take off and landings which was how we were able to defeat them. Well this replica me 262 part of the Collings Foundation was at the Wings Over Houston Airshow and naturally Dad, our good buddy Joe, and I just gravitated to it. It’s just not something you see all the time. 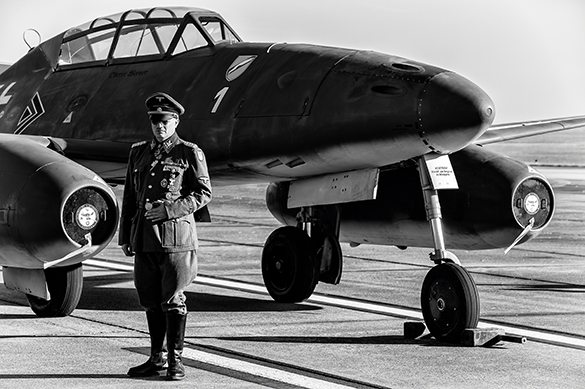 The plane was at the end of the ramp with more static planes behind it, so we never had a really clean shot of it. It’s one of those occasions where you take the shot anyways. After a while a reenactor came by in Infantry uniform and went over to the plane. Well of course we had to take the shot, it’s just adds a pop to the image. Using the D4 and 200-400, I isolated the plane and the pilot. The 200-400 is one of my favorite lenses to use as airshows for just that reason, isolating. Now Dad was the one who originally sparked the idea for the black and white but it was a good one.