The B-25 Mitchell Bomber was the little brother of the bombing effort. During the air war of WWII, the bomber campaign was one of the largest endeavors taken on by the Allies. High altitude precision bombing by the British and the United States was daily routine to keep the production capabilities, transportation and moral of the Germans to an absolute low. The B-17, B-24 and Avro Lancaster are three of the most produced and widely used bombers during the precision bombing campaign. The B-25 bomber was never designed for the purpose of high altitude bombing. It was originally designed as an attack bomber headed for England but other planes with better attributes for that role, including the A-20 Havoc. 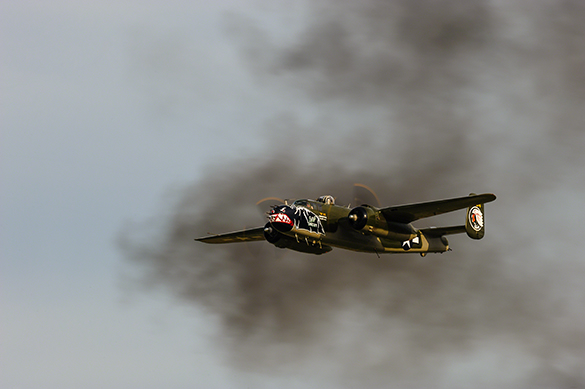 The US Army Air Corp liked the plane for a medium bomber and thats where it gained so much traction that it became a mainstay for allied nations. The B-25 was so well designed for it’s role that it was used in every theater of WWII. The greatness of the B-25 can only be measured by the capabilities of North American Aviation. North American was one of the largest producers of planes during WWII, while also the only plant to build trainers, fighter and bombers simultaneously. The AT-6/SNJ Texan, B-25 Mitchell, and the P-51 Mustang all came out of the Inglewood Plant while an additionally 6,608 B-25’s came out of the Kansas City plant. This gives the B-25 a very personally connection to my family as my Grandpa was the plant manager in Kansas City. It was one of those family facts that we didn’t really know more about until we got more involved with aviation. 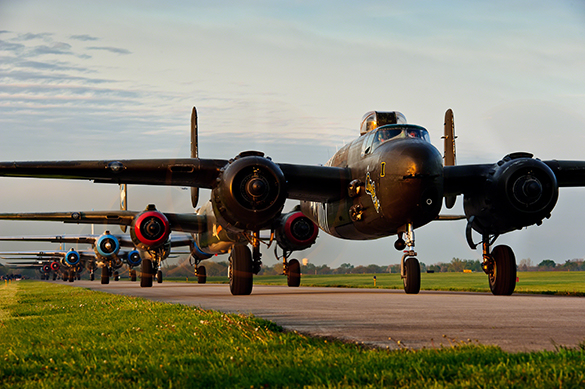 The B-25 quickly gained fame as the aircraft used for the Doolittle Raid on April 18th, 1942. Sixteen B-25’s took off from the carrier USS Hornet and bombed Japan. While the target was industrial areas on the island, the overall purpose was to achieve a demoralizing effect on the Japanese, by making them aware that they were able to be reached, while also having a positive moral booster in the US. This was the first strike after the infamous Pearl Harbor attack in December 7th, 1941. The concept originated from Navy Captain Francis Low, Assistant Chief of Staff for anti-submarine warfare, who reported to Admiral Ernest King who convened with President Roosevelt who requested the attack. The plan called for the use of medium bombers launched off carrier and then land in an allied country. Of the sixteen B-25s launched from the Hornet, one landed in the Soviet Union, one crashed on the coast and the rest went down over China. While most of the crew survived the planes were never able to be transferred for use in China, which was a tertiary objective of the plan. The history of the Doolittle Raid is a story in itself that can only be understood by looking at the lives of each man that went on the raid. The official historian and honorary Doolittle Raider, Carroll V. Glines, wrote one of the best books on the mission and I highly recommend the read.

In 2012 I had the great privilege to go to Dayton, OH to be part of the 70th anniversary of the Doolittle Reunion. Twenty of the then twenty five flying B-25s in the world were at the reunion. It was the largest gathering of B-25s since WWII. Jimmy Doolittle, who lead the raid and in which the mission was named after, promised his men that they would have a party when they all returned home after the raid was finished. It took many years to fulfill his promise as many of the men didn’t come home right away. Every year since the inaugural celebration in the late 1940’s, a reunion is held with the remaining members. A silver goblet engraved with each of the 80 mens name is brought in a special case. The survivors toast those that are left and those that have passed on. At the time of the 70th Reunion in 2012 there were five remaining raiders. As of today there are only three.

In the above photo, the lead plane is the only B-25H in the world, Barbie III. This particular B-25 is one of the best examples of a ground attack bomber as it houses fourteen .50 caliber machine guns, four of those in the nose and a 75mm cannon in the nose. The force of the cannon was so great that the entire plane vibrated, noise rang inside the fuselage and smoke filled the cabins, after a shell was fired. After a dozen rounds the nose had to be replaced the vibrations were so great. However the low level attacking that the B-25 was doing against bridges, truck convoys, radio installations and anti shipping that the forward arsenal made the B-25 very formidable. This does not include the 3,200lbs of bombs it was capable of carrying. 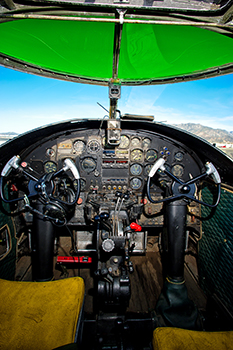 The B-25 was crewed by six men; pilot, copilot, bombardier or nose gunner, radio operator or waist gunner, flight engineer or navigator and tail gunner. The plane was equipped with a top turret, waist guns and in later models a nose gun that was operated by the bombardier. The radio operator, navigator and bombardier could switch off positions if needed to the other gun positions. In Chino, CA is Aero Trader, the leading restoration facility for B-25s. Every B-25 that is flying today has at one point or another has been worked on at the facility. Aero Trader owns only one B-25, Pacific Princess which is a J model and has a cabin in front of the pilots for the bombardier and a single .50 caliber machine gun. I had the chance to get inside Pacific Princess a couple years ago to see how much space was really inside a B-25. The main compartment is in the front with the pilot and copilot seat and enough space for a jump seat behind the pilot. The radio operator had to be crammed in right behind the bomb bay to act as waist gunner if needed. One main passageways exist along the top of the bomb bay that links to the rear waist guns and tail gun. A second tunnel exists that leads underneath the main cabin to the front nose gun. 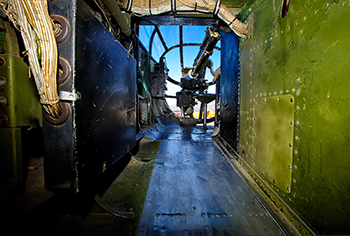 Being only 5’10 and a 150lbs I can honestly say that getting around inside that plane isn’t easy. Of course I had a camera in my hand but even still, for the young boys that were flying that plane in combat I can’t imagine what it was like. Have flown in the plane several times, including Pacific Princess, Arizona CAF’s B-25J Maid in the Shade and the Texas Flying Legends B-25J Betty’s Dream, I can also say that it was one fun plane to fly in!

There was a time when planes like the B-25 or B-17 could be seen flying in swarms across the sky. Nowadays seeing just one flying is impressive. After the wide usage throughout the war, including the US Army Air Corp, US Navy, and the US Marine Corps, the B-25 kept it’s reputation for being a reliable aircraft. One example of a US Navy versions is being restored in the CAF SoCal Wing. The B-25 went on to fly in several other key positions one of those being as a water dumper It’s ability for low level flying and capacity for 3,200lbs of storage space in the bomb bay made it useful for hauling gallons of water over wildland fires. B-25’s also went on to serve in several other countries including several in South America. Throughout the war the B-25 was used by the British, Canadian, Australian, Dutch, Soviet, Chinese, Brazilian and Free French Air Forces. The airmen of these nations as well as our own helped to cement the history of the B-25. 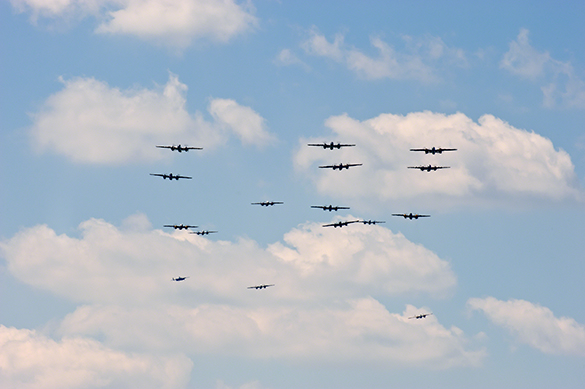 If your out an an airshow, or have a museum by you, keep your eyes to the sky and ears open for you might just hear its twin Wright R-2600 Engines going by. If you have a true passion for the plane several museums offer rides in the B-25 and from personnal experience, it’s worth the price of admission!