This past weekend was truly beautiful. It felt like Spring even though it still isn’t yet. The mid fifty temperatures just begs to get outdoors but I couldn’t think of anywhere really wanting to go out shooting so I thought why not do some late night shooting. After all the time I have spent shooting here in Montana I have actually done very little star trails or light painting photography at night. Don’t know why but it is something I plan on changing. 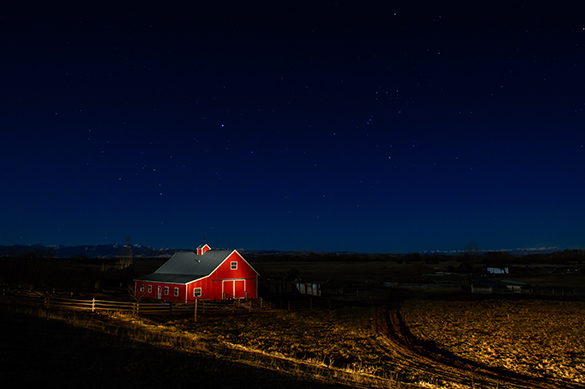 Shooting at night is a lot of fun but sometimes it can be very boring. It just so happens that the night I choose had an overcast sky and true brilliant planning an almost full moon. When that happens the best plan is to wait it out till it gets darker. Thankfully the sky broke and the moon, well didn’t change much. It was still really bright out. I went over to the Gafke ranch which is where I practice different techniques quite often. With the great landscape and barns it’s an easy choice. 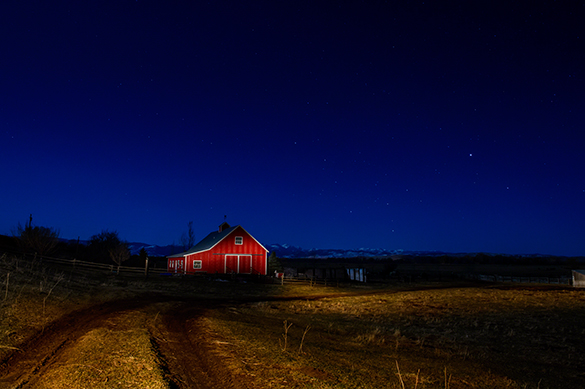 With the bright moon it was obvious that great star trails wasn’t going to be as strong as other nights, but the light painting was going to be fine either way. Shooting with the D4 and 24-70 AF-S f/2.8 on a tripod I started with the red barn. Now a quick tip for shooting at night, the D4 has a setting in the shooting menu called Long Exposure NR. This setting helps make a cleaner image by reducing noise in the camera. After that it’s just a matter of finding the desired shutter speed. The longer the shutter is open the more light will come in including moon light and stars. When it comes to light painting it means that the light from the flashlight is going to be the brightest so less if often more. Also the light source closest to the camera is going to be the brightest. This is why if you are going to go out shooting and play with this technique to practice a lot.