When I first saw this plane it was in a black and white photo much like the one below. Many famous black and white photographs were taken after the Japanese strike on Pearl Harbor, December 7th 1941, of the ships and planes that were destroyed at the base. Amongst those photographs was a shot of a row of PBY flying boats that were beached after the bombing. Shots like that one have stuck in my mind as ones of interest and while I don’t want to recreate that exact image, the feeling and power in the image is something that I strive for. It was that image that first got me interested in this particular aircraft and is to this day one of my favorite planes, Consolidated PBY Catalina. 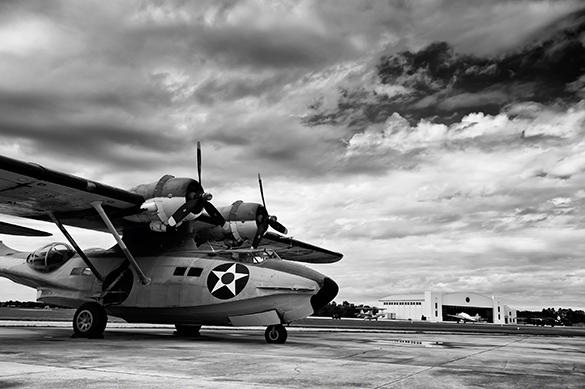 The PBY was a long range Patrol Bomber that served many uses by the Armed Services as well as Air Forces for many other nations. It was developed throughout the 1930’s and first flew on March 28th, 1935. Over three thousand were built between 1936-1945. They were retired from the US Navy in 1957 but remained in service with the US Air Force until the 1980’s. Today many still remain active as an aerial fire bomber all over the world. One of the reasons it was such a successful aircraft was that it had a range of about 2,500 miles. The combination of such a large range, cargo hold up to 4,000 lbs including possible armaments, and landing capabilities on both water and land made this an ideal airplane for the Pacific. 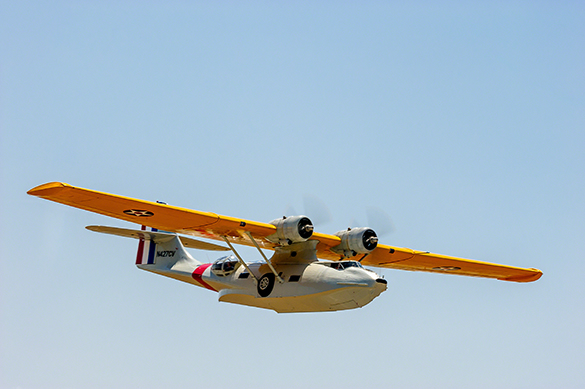 The designation PBY actually means Patrol Bomber and then the Y is for Consolidated. While it was primarily designed for that purpose the plane served many others throughout it’s career. Such roles included, antisubmarine warfare, maritime patrols, night attack and interdiction, search and rescue and some early commercial use. Throughout those roles it was given several nicknames, two of the most popoular were the “Cat” for combat missions and “Dumbo” for rescue operations. One of the most interesting features of the plane is its Wingtip retractable floats which allow for greater stability when landing on the water and more streamlined flight performance when in the air. This is seen above and below. 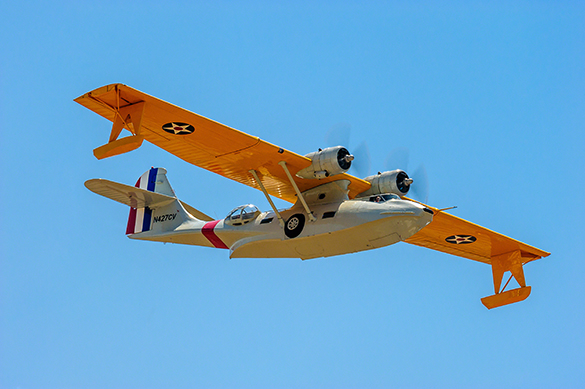 This particular PBY belongs to Jim Slattery and his Greatest Generation Naval Museum. While several examples still remain on static display at various museums, this is one of the few flying examples with a military scheme, both inside and out. 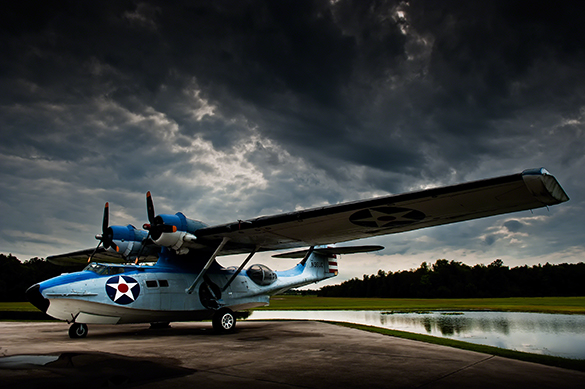 This PBY, as well as in the first image, is part of Fantasy of Flight in Polk City Fl. It is a PBY-5A Catalina built in 1943. The name Catalina came after the Catalina Islands in 1941. The United States insignia on the plane actually goes back to WWI which wanted the three primary colors of the American flag present in their insignia. The blue circle around a white star and a red inner circle roughly 1/3 the diameter of the blue outer circle. During WWII this was put onto American planes but found that friendly fire incidents arose, initially being blamed on the red circle which had at that point been reduced to appear as the points of a center of a pentagon. The overall look at a distance was too similar to the Japanese Hinomaru symbol and thus a pole was taken in which it was the shape that was consistently reported as being the problem, not color. By June of 1943 the insignia was redesigned with bars flanking the roundel with a red border all the way around. By September of 1943 the red was still unsatisfactory and a blue outline was put around the design. By 1944, US Navy aircraft were painted in almost the same gloss midnight blue as the outer blue line of the insignia as well as the roundel, so the blue was left off with the white remaining.

The PBY Catalina was one of the most important players over the Atlantic and Pacific Oceans. It also made a fair reputation in the Indian Ocean. It is known to have sunk forty submarines in the Atlantic on antisubmarine missions, while at the same time PBY’s were picking up downed airmen in the Pacific. Thousands of men owe their lives to the this plane. While it certainly is not the fastest plane, with a speed of 179mph, nor is it the sleekest looking with its giant upper wing, the PBY does have a long and important note in the pages of Aviation History.