Many heroic stories were told of the brave men in their Grumman Hellcats and Chance Vought Corsairs fighting the nimble Mitsubishi Zero in the skies over the Pacific. While these aircraft have gone down in lore of the perilous battles they were poised in, before they were even built, many aces were being made in a much less glorified but exceptionally hard working staple of the US Navy and the British Royal Navy, the Grumman F4F Wildcat. 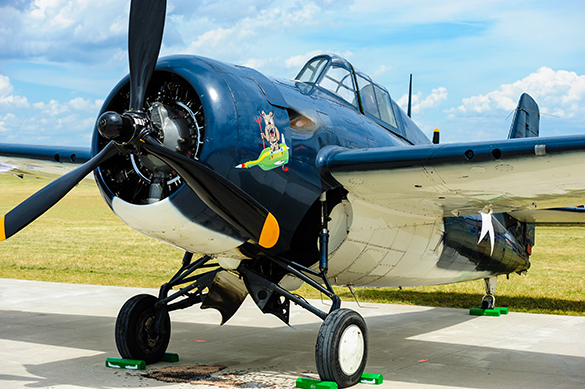 WWI proved the necessity for air power however many questions still lingered about how effective certain areas would be with the use of aircraft opposed to more traditional means. Carriers had been proven to be very effective, even if carrier tactics at the beginning of 1940 were still rather unknown, mostly because they were still being developed. The need for faster, more rugged carrier based fighters was needed and the Wildcat served that purpose in 1940. In the early parts of the WWII the Wildcat was the only option for US Navy and Marine divisions in the Pacific. The Hellcat and Corsair weren’t available until much later. For the first two years the Wildcat had to be the answer. While The Wildcat was not as fast as the nimble Zero, with a top speed of 318mph compared to 331mph, the Wildcat was a rugged plane with a simplistic yet strong internal structure. The Wildcat helped to save many pilots as they consistently were bringing the pilots back home. It was not uncommon for the planes to be riddled with bullet holes and yet still able to fly. 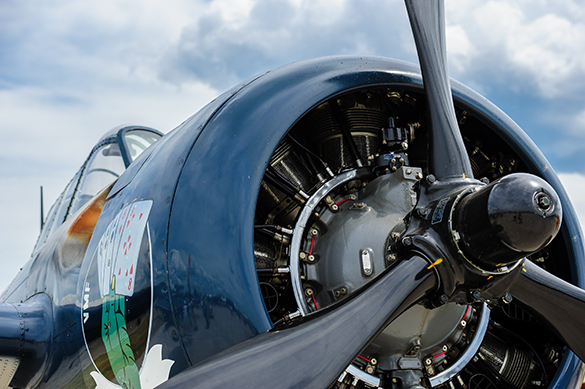 Like most fighters that went through WWII, the Wildcat went through several changes and upgrades until it reached the F4F designation. Originally it was called the “Martlet” used for the first time in Europe by the British Royal Navy. The F4F started with the FF biplane but which featured the first Us Navy retractable landing gear. It was a manual operation to hand crank the landing gear during takeoff and landings and the design would last all the way through to the F4F. This made the plane rather tipsy when parked. It also lead to accidents as occasionally the landing gear wasn’t all the way locked in place. The FF biplane lead to the F2F and F3F Flying Barrel. The general fuselage shape was created and lasted through the F4F with mechanical and performance enhances made. The US Navy however preferred the monoplane design and Brewster was working in competition with the F2A-1, which would later become known as the Brewster Buffalo. In 1936 and order was placed with Brewster with a second order being placed with Grumman for the G-16, designated by the Navy as XF4F-1. The Buffalo proved to be better, so serious modifications had to be made to the -3 with improved tail, wings and a Pratt & Whitney R-1830 “Twin Wasp” radial engine. Testing led to production orders of the F4F-3 including an order from France with the Wright R-1820 “Cyclone 9” radial engine; however, France fell to the axis powers and the planes were delivered to the British Royal Navy in 1940 instead, who renamed the plane the Martlet. On October 1st, 1941 the US Navy received its first F4F-3’s and named it the Wildcat. 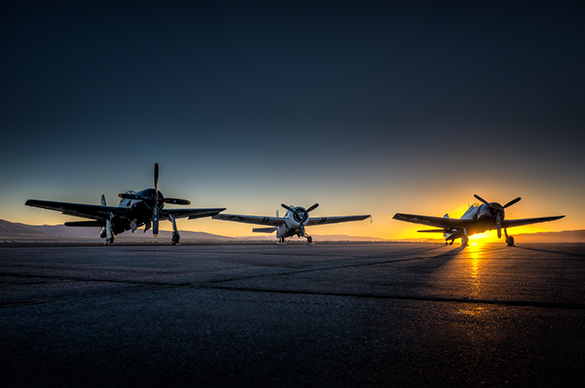 The history of the Wildcat began long before it was in the US Navy. The British Royal Navy used it as a replacement for their Fairey Fulmar, which was a two seat fighter that had inadequate performance compared to single seat fighters in Europe. The Supermarine Spitfire was in too high a demand for the Royal Air Force so very few made it to the Royal Navy in 1940. The Martlet, as known by the British, first drew blood on Christmas Day 1940 when it destroyed a Junker Ju 88 bomber over Scapa Flow naval base. This was the first US built plane in British service to score a combat victory in WWII. The Martlet remained in active service with the Royal Navy until the end of the war and flew its last mission on May 5th, 1945. In January of 1944 it was no longer known as the Martlet but officially the Wildcat. 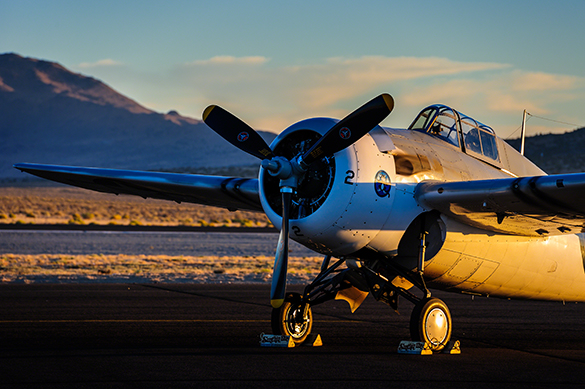 In 1943 demands for aircraft changed and Grumman no longer had time to build Wildcats. While the company still held the production rights, General Motors Eastern Division started building Wildcats. Grumman was called on to build a faster better performance fighter for Aircraft Carriers. The F6F Hellcat was their solution. However, the Hellcat and later Corsairs were too heavy, too big and too powerful for the escort carriers so the Wildcat remained in service on the smaller vessels. General Motors ended up building 5,280 FM-1/-2 variants, the -1 was virtually the same as F4F-4 but later changed to handle only four guns and a larger payload, while the -2 was equivalent to the XF4F-8 prototype, which had a faster Wright R-1820-56 engine and a taller tail to handle the torque. This makes the earlier 1940-1943 Grumman Wildcats much rarer.

Both Wildcats seen here are General Motors Eastern Division FM models. The top is the FM-2P owned by the Texas Flying Legends Museum and the second is the FM-2 “Air Biscuit,” owned by Tom Camp and who is a regular at the National Championship Air Races in Reno,NV. Back in 2012 at the Air Races, we had the great privilege and opportunity to have four of the Grumman “Cat” family planes participating in the races. One of the mornings we were able to get three of the four planes out on the tarmac for a static family reunion photo shoot. It was a great chance to put a piece of history together as each plane stamped out its own history. The F8F-2 Bearcat and F6F-5 Hellcat are part of CAF SoCal. 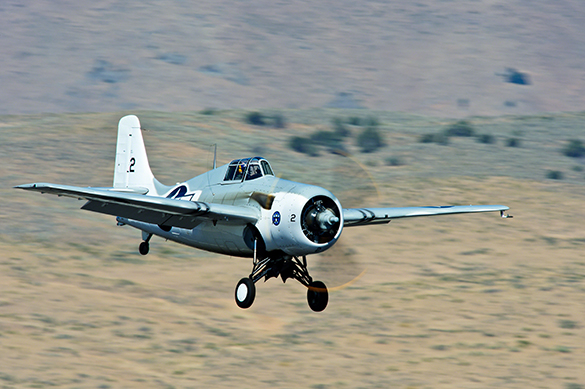 While the Wildcat was out maneuvered by the Zero, thanks to the planes rugged design, self sealing fuel tanks and the Thach Weave, the Wildcat proved a worthy adversary for the early parts of WWII in the Pacific. USN Commander “Jimmy” Thach created a defensive technique, known as the Thach Weave, that allowed the pilots of Wildcats to counter diving fighters while in formation. His technique along with the bravery of the pilots helped turn the tide in the defense of Wake Island, Battle of Coral Sea and Midway. It also played a major role in the Guadalcanal Campaign as part of the Cactus Air Force. The Wildcat was a front line fighter until early 1943 when it was replaced with the Hellcat and Corsair. It still played a role against ground targets and submarines. One of the Wildcats last major victories was in the Battle of Samar when the escort carriers of task force 77.4.3 (Taffy 3), and their destroyers and destroyer escorts, protected the transport of troops and supplies to the Philippines in Leyte, against a much larger surface force of battleships and cruisers, including the Yamato. Confused after meeting strong resistance the Japanese Navy eventually withdrew.

Many pilots became aces in the Wildcat including Butch O’Hare, Joe Foss, and Marion Carl. Joseph Foss had 26 confirmed kills in a F4F. Seven of the top Fifteen Wildcat Aces were awarded the Medal of Honor, including Butch O’Hare and Joe Foss. This little plane made a big difference at a time when it was needed. Despite it being smaller and slower then other fighters during WWII, this plane helped to turn the tide and gain air superiority in the Pacific.