I’ve spent most of my life living in the mountains and it still amazes me how much the landscape can change. For a couple of years now I have gone to one spot just south of town for sunset shoots of the Bridger Mountains. The main reason is an obvious one, it’s a really good spot! when you find great haunts you go back to them because they do change, they’re never quite the same as the last time. Well Spring is not here yet but it sure does feel like Spring with all the 60-70 degree days. Hard to even type those numbers since it is March still. Spring brings about one of my favorite landscape opportunities and that’s afternoon thunderstorms leading up to thunderstorm sunsets. 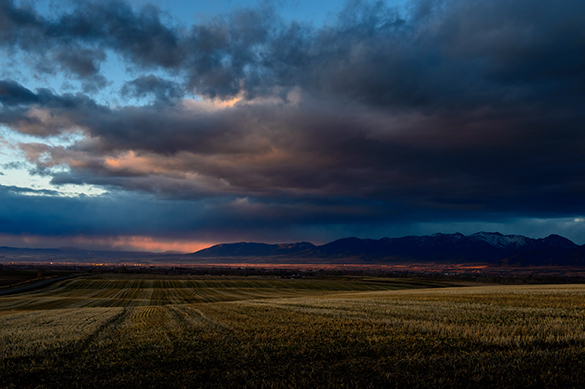 The best landscape photographs have great light which creates great drama. Even the most boring of earthly lands can be made great with clouds and the right light. When it comes to the Rocky Mountains, the land is anything but boring. Spring time fills in the other half which are the clouds and around Bozeman we get some pretty bizarre weather patterns rolling through, which bring in great clouds. Thanks to high winds, positioning at the end of the valley between the Bridgers and Gallatin Mountains, and the elevation of the town, we tend to get it all. 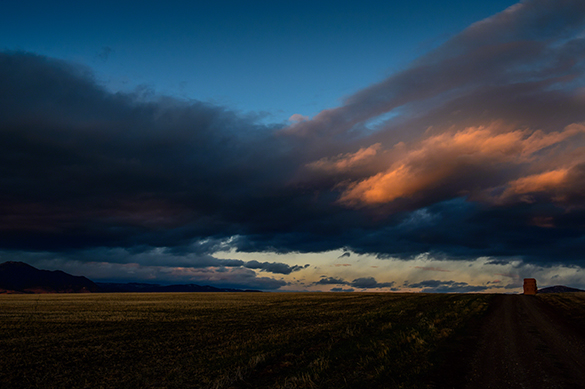 Last Saturday a small storm was passing through with really fast winds. That morning I was out fishing on the Yellowstone River which was great until the winds picked up making it hard to even hold a fly rod, but as predicted, the storm quickly went by and the winds were all that were left. I was hoping that the tail end of the storm would remain over the Bridgers for shooting later that evening and sure enough they did. With the D4 and 24-70 AF-S f/2.8, I went to my old haunt and made a couple of clicks. The one nice thing about living in a farming/ranching valley while surrounded by mountains, is the golden fields are often a great visual line throughout the image.