Last week I talked about the Grumman F4F Wildcat and it’s contributions to WWII. It seemed only fitting that this week I talk about that planes nemesis, the Mitsubishi A6M Zero. This was the most maneuverable aircraft in the skies over the Pacific and Southeast Asia during the first half of WWII, arguably throughout the whole war. While certainly not the fastest aircraft built, with a top speed of only 331mph, the menace of this nimble little plane was its ability to turn on a dime. The maneuverability of this aircraft made the Allies take serious measures to design better aircraft to fight it. While the Zero was introduced in 1939, it wasn’t until July 11th, 1942 that a captured wrecked example was found on Akutan Island in the Aleutians. Parts of destroyed Zero’s were found at Pearl Harbor after the raid on December 7th, 1941 but those planes were unable to be repaired. The Akutan Zero was the first restorable and later flying, example of the Mitsubishi Zero that the US Intelligence had possession of. Throughout 1942 the only US fighter available to combat the Zero was the F4F Wildcat. In early 1943 the F6F Hellcat was introduced to the US Navy and approved for Carrier operations. The Vought F4U Corsair was ready at the end of 1942 but had characteristic flaws for Carrier operations so was released to the Marine units on islands in the Pacific, including Guadalcanal. From 1943 onward the Corsair was in service. Each of these fighters led it’s own unique history combating the Japanese Zero but are not the main focus here. 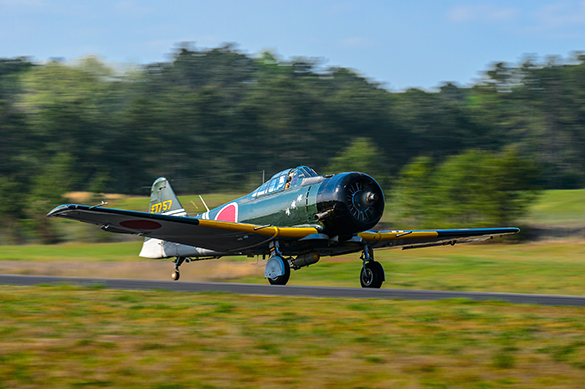 The Zero was designed by Mitsubishi Heavy Industries as a front line carrier based fighter. In early stages of the war it was considered the best carrier fighter with a long range of 1,900 miles and vast maneuverability, far more so then any allied fighter. It was designated the Navy Type “0” Carrier Fighter, or Mitsubishi A6M “Rei-Sen” or “Zero-sen.” Japanese pilots knew it as the “Zero-sen” or zero fighter for the 0 being the last digit of the Imperial new year 2600 (1940), the year it was introduced into service. The A6M referrs to “A” for carrier based fighter, “6” for model number and “M” for Mitsubishi its maker.

The allies called it the “Zeke,” keeping with the practice of male names to Japanese fighters, female names to bombers, bird names to gliders, and tree names to trainers, although the name “Zero” eventually stuck. With many problems facing the land locked country of Japan, production was a major problem as supplies kept them from growing. Many of the raids on Asian countries were to gather precious rescources that were needed to wage war. As a result of production issues the Zero was never able to keep up with Allied fighters later in the war. Improvements were being made on US Navy fighter to out match the Zero’s speed, performance and range but never manuverability. Despite new fighters being designed by Mitsubishi, the Zero remained a fornt line fighter until the end of the war. One of its most famous roles was as a kamikaze plane, ramming head on into US Navy vessels in hopes of destroying the ship while sacrificing the pilot. At this time in the war, the amount of Japanese planes exceeded the number of qualified pilots resulting in a need to do more damage faster. Several beliefs and bad information were attributed to both sides during this period. 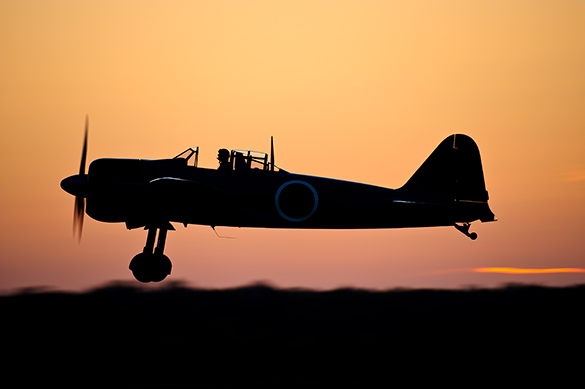 In 1937 the Mitsubishi A5M had entered service and was fighting in China when the Imperial Japanese Navy started looking for replacements for Carrier Operations. A call went out to Mitsubishi and Nakajima with very specific requirements including; faster speeds, better rate of climb, better armaments, better radios and all based on current available engines. Nakajima believed the the requirements were too much to accompany into one plane and pulled out but Jiro Horikoshi, chief designer at Mitsubishi, believed that the requirements could be met with significant trade offs. Every weight saving procedure possible was used to make the plane lighter, including the top secret 7075 aluminum alloy, called Duralumin, which was partly made of Zinc to allow for better strength, less weight but far more corrosion. As a result a special chemical was painted onto the metal after fabrication to counter the corrosion. No armor plating was put onto any part of the aircraft making it more vulnerable as well as no self sealing fuel tanks, an increasingly more common part built in allied fighters. Due to the planes high-lift, low-speed wing with a very low wing loading, and the light weight design resulted in a stalling speed of under 69mph. This made the Zere, over 10,000 having been built, the most maneuverable single engine fighter of WWII. The tradeoff off of this design was later seen as dogfights would ensue and hundreds of rounds would be put into Wildcats, Hellcats and Corsairs and the plane would keep flying, while only a couple shots would send the Zero in a downward flaming ball. 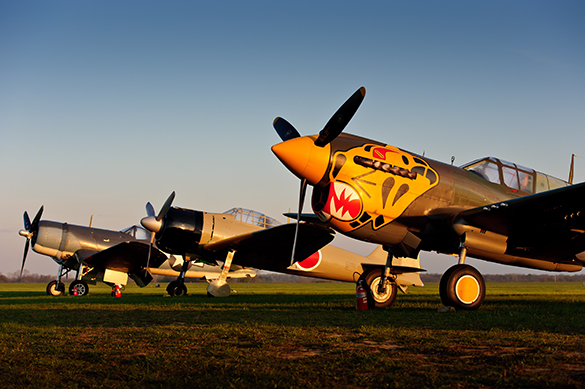 There are only five flying examples of actual Zero’s around today and several examples of converted T6 Texans. Hollywood as helped keep the Zero alive with several adaptations needed for various movie roles including Tora! Tora! Tora!, Midway and Pearl Harbor to name a few. The top photo is of Jack Van Ness’s A6M2-21 Zero which was converted from a Harvard Mark IV a variant of the T6 Texan. This plane was repurposed for the role in Tora! Tora! Tora!, Midway, War and Remembrance, and the TV series Baa Baa Black Sheep. It can be seen today at CAF Dixie Wing in Peachtree, GA.

The two photos below it are of the Texas Flying Legends aircraft. The FG-1D Corsair, Whistling Death, P40K Warhawk, Aleutian Tiger, and A6M2 Model 21 Zero, Last Samurai were all part of the 70th annual Doolittle Reunion three years ago in Dayton, OH. One of the main adversaries of the B-25 Mitchell Bomber was the Zero. The famous Doolittle Raid took place as a retaliatory strike against Japan and later the B-25 would be used heavily in ground attack roles in the Pacific. The Texas Flying Legends B-25J Betty’s Dream, took part of the 70th reunion. Two of the main adversaries of the Zero are seen here, the FG-1D Corsair, introduced in 1943, FG standing for Goodyear instead of FU for Vought, and the P40 Warhawk witch engaged the Zero in China, long before the Corsair was built. Last Samurai was recovered from Ballale in the late 60’s, a small island south of Bougainville, and is praised as one of the most accurately built Zero’s left in the world, with the exception of its DC-3 engine. 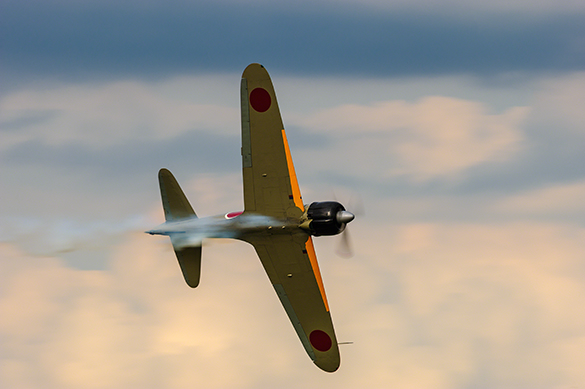 The combat history of the Zero began in 1940 when the Zero scored its first air to air victory against China based Soviet built aircraft of the Chinese Nationalist Air Force. 420 Zeros were active in the Pacific by the time of the Pearl Harbor attack. It quickly gained a fearsome reputation due in part to its long range capability. The Zero could take off, travel hundreds of miles, fight, and fly back to their Carriers. This gave the impression of a much higher number of Zero’s being in existence at the time then in reality. The Zero was even a tough opponent for the British Supermarine Spitfire. The tight turning capability and high rate of climb made it nasty opposition. However, tactics soon emerged to counter the nimbleness of the Zero. Allied fighters would soon use the “boom-and-zoom” tactic. The idea was to attack from a high altitude position, dive down and strafe the planes in one quick pass, then climb back up above the Zero’s for another run. Due to the fragile design of the Zero, in many instances one good pass of heavy machine gun and cannon fire would be enough to send the plane crashing into the sea. Another key element used to take on attacking Zero’s was the Thach Weave. Two allied fighters would fly not far apart from one another and if an enemy attached itself to one, both would turn into one another, allowing for either wingman to get a shot off on the enemy. This maneuver helped many pilots beat the odds. Despite characteristic differences in aircraft, pilots from both sides admired and dreaded their opponents. Japanese pilots knew that their Grumman counterparts were strong and tough, while US pilots knew how nimble and precise the Zero could be. This lead to many fearsome and historic battles occurring throughout the Pacific Theater of WII. 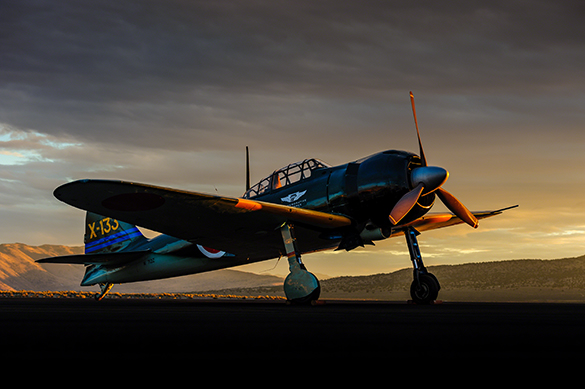 Just as the Focke Wulf or Me 109 was the “villain” over the European skies, the Zero was the main “villain” over the Pacific. Today we look upon these planes not as what they did but of what they are. They are technological achievements in a time where the slightest edge means life or death for the other guy. Sadly very few original examples remain of any of these aircraft, which means that more history is lost. The above Zero is an A6M3 of CAF’s SoCal Wing. One of the largest museum chains in the world, the Commemorative Air Force continues to embrace our heritage, honor our veterans and keep history alive, which is exactly where this plane belongs.