With the launch last week of Lightroom CC there was also an update to Camera Raw 9.0. With this new update came the ability to merge images in ACR to create panos and HDR images. For those that have ever tried to make panos before, using ACR is so much nicer! It’s a very fast method and best of all it’s still using raw files with the ability to make changes in ACR after being merged. I took advantage of this ability this past weekend at Canyon Ferry Lake.

Lakes are a great place to make panos because they are usually surrounded by great landscape. Water is also a great natural reflector so having a good sky can make for some pretty dramatic images. This past weekend we had some pretty intense spring storms coming through south western Montana and traveling north a couple of hours the storm was still going through. Thankfully it passed by for sunset and while I was working at the Montana Learning Center I had time to grab this quick image. Now as soon as I saw the lake and the clouds I knew a single image wasn’t going to be enough. There was just too much story to tell in one image so that’s why I made this two image pano.

This is a very simple two image pano one shot of the left and one of the right. The important thing to remember with panos is there has to be an overlap of information in each image that is being stitched together. This is how the computer recognizes the images. Depending on what you are shooting this can be difficult. Having obvious landmarks in the composition makes it easier. This was hand shot with the D4 and 24-70 AF-S. One thing that I like to do with my landscape images is shoot with a greater depth of field so that more information is sharp which is important when making a print and panos make very big prints. 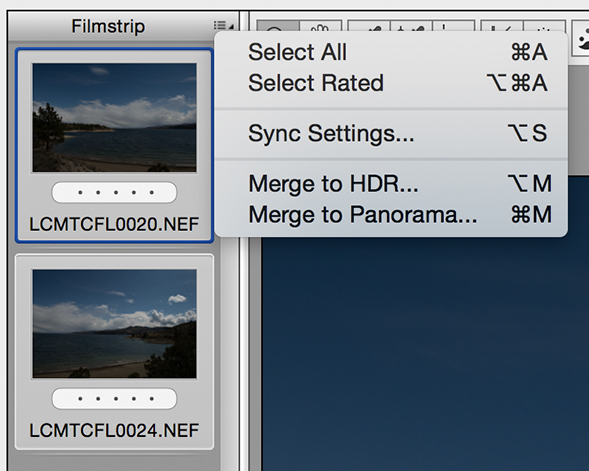 When making a pano in ACR it’s as simple as selecting multiple images and then opening them in ACR. After they are open, simply select the images you want to merge and then go to the top left corner where there is a button with a couple lines and an arrow and when clicked a drop down menu appears that has the merge option in it. 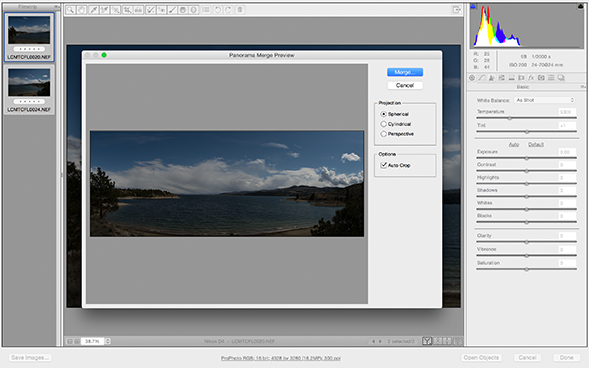 Then this box appears which has the various pano options. One important one is the auto crop which does a great job of cleaning up the edges. After that click merge and the computer stitches it together. It’s fast and simple which means more time to for other things. Once the pano has been stitched together it’s up to you decide what else to do and since the image is still open in ACR there are lots of ways to finish the image based on your own style.