Warblers are constantly on the move and that makes for challenging photography. The plus side is it usually doesn’t take much to get a great gesture out of them because they are constantly hanging off of branches in interesting angles. This Bay Breasted Warbler winters in South America and then Summers in Canada. They can be seen migrating throughout the US throughout the Spring and Fall. Right now is the peak time for the Bay Breasted to come through Magee Marsh and every birder was happy to see them. We found one tree that three males liked to hangout in and we spent a few hours sitting them working them. 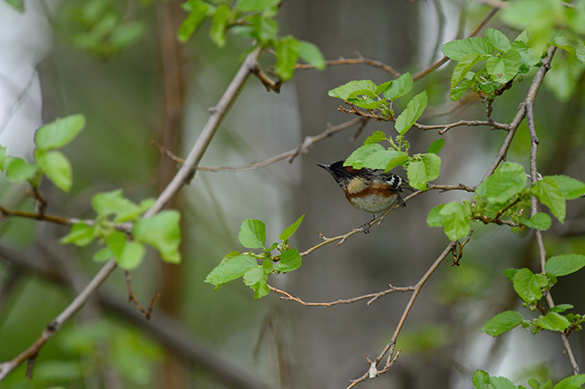 When you find a good spot that the birds are coming into it’s good to get the “in the bank” shots and then start to play around with other ways to shoot. After about an hour of shooting these guys I started doing that by changing the flash settings and changing orientation. One of the great challenges with Warblers, due to their nature of constantly jumping around, is it becomes hard to photograph them and not be dead center. Since these birds are so small it is easy to keep them in that one spot but unless the bird is full frame it’s better to keep the to the side with some lead away space. By changing the focus point to be off center when you’re shooting it’s easier to keep the bird off center also. 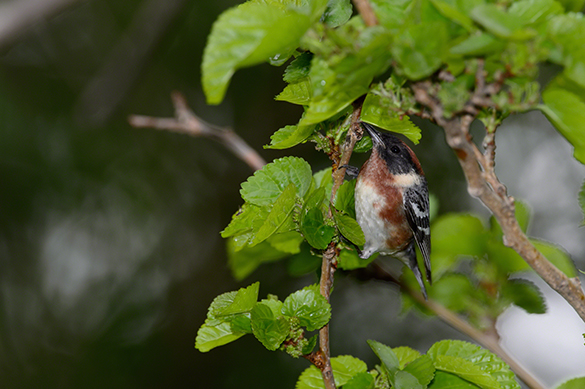 One of the challenges that I had was working with the flash. Since it is a forested area and the birds are constantly moving you have to setup and wait for the birds to come in. Well generally that means the background between the forest edge and the tree edge is different. The branches closest to us were very green moving slowly back to a darker, greyed out tree trunk. Between that distance and the type of background, the light will change. 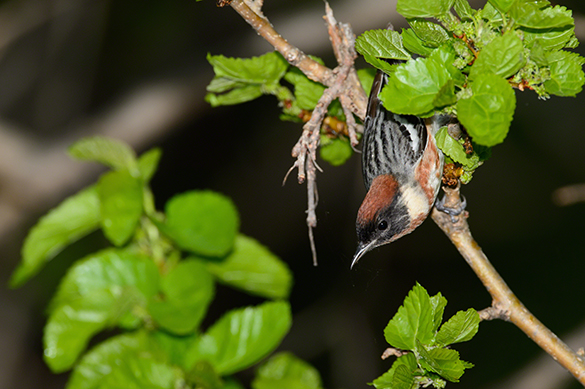 Since we had so much time with this one particular species I ended up playing around with the exposure value in the flash and the exposure compensation in the D4. By going positive in the flash and -2.0 in the camera body you get the result you see here. A much darker background and the flash is the light source. But to get a more natural result I went minus in the flash and only -1.0 in the D4. I’m not really sure which look is better but I preferred the more natural look which is why I kept playing around with the settings. Since we had overcast skies the light was generally pretty diffused but it did change throughout the day.

The one thing that I noticed about Warbler behavior is that they really don’t like to stay out in the open for too long. They are constantly on the move and they are constantly behind some branch or leaf. While watching a particular individual I was always seeing where an opening might come up and be prefocused on that spot in case that individual decided to go there. In this particular case this male Bay Breasted Warbler did just that.