One of the most feared fighter planes that faced the allies is also one of the most rare planes that exists today. The Focke Wulf Fw 190 was a fearsome opponent to allied aircraft on the European and Soviet fronts. The Focke Wulf made aces out of both German pilots and allied. The Focke Wulf 190 and it’s counterpart the Messerschmitt Bf 109 were the two primary fighters of the Luftwaffe’s Jagdwaffe (Fighter Force) until the it was proven that the greater carrying capacity of the Fw 190 could be used as a ground attack plane in which it was then implemented in the Schlachtgeschwader (Battle Wings or Strike Wings) in the Eastern front. The Focke Wulf first flew in 1939 and was introduced in 1941 to the Luftwaffe and stayed in service in Germany until 1945 and then retired from Turkey in 1949. 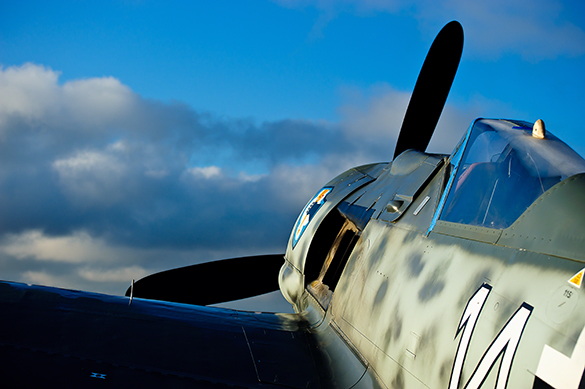 In the first couple of years of service the Fw 190 was the best in the sky at low and medium altitude. Then in July 1942 the British introduced the improved Spitfire Mk.IX which was a better performing aircraft. The German pilots believed that the Fw 190 with its twin-row BMW 801 radial engine was still more powerful and maneuverable at low and medium altitudes then it’s counterparts but the Messerschmitt Bf 109 remained in service nonetheless. In 1944 the Focke Wulf Fw 190D was equipped with a Junkers Jumo 213 inline-engine which made it on par with allied fighters but due to the attrition rate from allied fighters and strategic bombing, by 1944 there wasn’t enough skilled pilots left to fly mass numbers of these improved Fw 190’s. 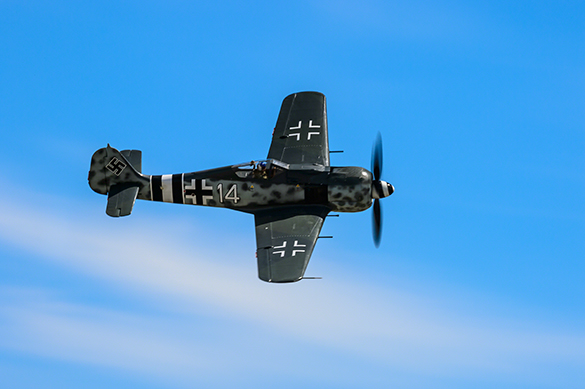 One of the most unique features of the Fw 190 is it’s enlarged frontal nose and narrow fuselage. It was a wide spread belief throughout Europe that radial engines didn’t belong in land based fighters as they created too much drag on the plane. However, Kurt Tank the designer for the Fw 190 wanted to prove those beliefs wrong having seen radial engines being used on Navy planes with great success. Air flow had to be maximized on the outer edges on the radial engine in order to properly cool the cylinder heads. This proved to be one of the greatest challenges. The engineering of the Focke Wulf was said to be a head of it’s time using many engineering methods that would be used later in other planes. 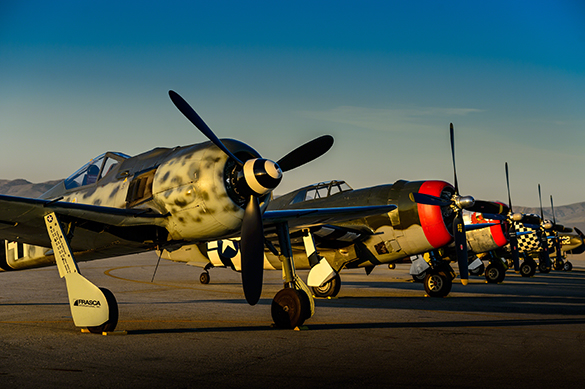 The Fw 190 went through numerous variants as its roles throughout the German Luftwaffe became more dispersed. From photo recon to ground attack this plane was everywhere that the Luftwaffe was. Sadly, less then thirty original examples of this plane remain in museums or private hands. Numerous replica examples exist due in part by the company Flug Werk GmbH which in 1997 started making reproduction Fw 190’s. A Fw 190 A-5 / U3 (Werknummer 151227) crashed in a marsh 1943 in Saint Petersburg, Russia nearly intact and was found in 1989. It flew in 2010 before being trucked to Washington where in 2011 it became a part of the Flying Heritage Collection. 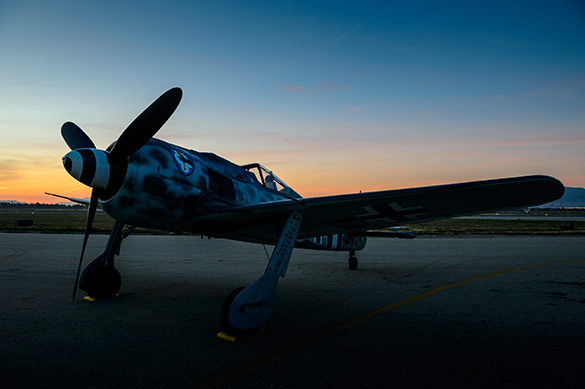 All the images here are of Planes of Fame Fw 190 replica Focke Wulf. This particular example can be seen all over as it is consistently being flown to show what the allies were fighting in the skies over Europe. Few examples fly today but thankfully with the help of some groups, examples like this one can be seen. These shots were taken at the Planes of Fame Airshow over the last couple of years where for two days a gathering of historic warbirds come out from all theaters and years. The top image is from Oshkosh back in 2011.