There have been many iconic planes that have contributed to the history of aviation but one of the early contributors that can still be seen flying today is the Ford Trimotor. This all aluminum, 8-17 passenger plane with a crew of two, helped to usher in the era of early commercial transport and domestic routes. Developed in 1925 and first flew in 1926 the Ford Trimotor was used by many commercial operators throughout the United States, South America, Africa, Asia, Australia, and some European countries. It was then later used by Transcontinental Air Transport, later TWA, and Pan American Airways. It was in service until 1934 when the Boeing 247 and Douglas DC-2 enter service and eclipsed the Trimotor. The plane quickly was given the affectionate nickname of the Tin Goose. 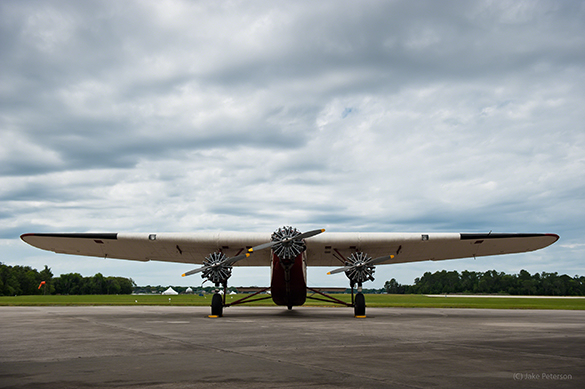 In 1925 Henry Ford started the Ford Reliability Tour to showcase his renewed interest in aviation. Among the contestants was Anthony Fokker who entered the Fokker F.VIIa-3m tri-motor. With 3 200hp Wright J-4 Engines, Fokker’s trimotor easily won. Ford was inspired after the tour to develop his own airplane seeing the demand in the commercial airspace field. He started with a company he had previously invested in the Stout Metal Airplane Company owned by William B. Stout. Ford bought the company in 1925 and asked them to develop their already successful 2-AT mailplane, a single engine, all metal high wing aircraft, into a trimotor. The result was the 3-AT but failed and was mysteriously destroyed in a hangar fire. the 4-AT was a success and was further developed into multiple variants all the way to the 8-AT, with conversions of 4-AT and 5-AT planes into 9-AT, 11-AT, and 13-AT variants. A total of 199 Trimotors were built of which 18 are known to exist as of 2012. 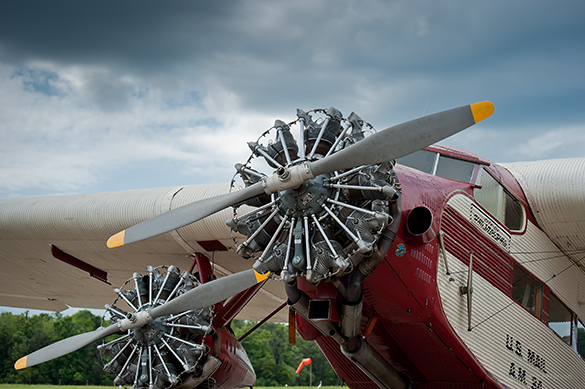 The Ford Trimotor was built with an all aluminum surface including the flight controls which most planes at that time had fabric covered controls. The surfaces were built with 3 layers “Alclad” aluminum sheeting with the inner most layer of duralumin, which had pure aluminum coating on either side. This made the plane incredibly resilient to corrosion even at the joints and rivets. Adding to the ruggedness of the plane was the corrugated metal but the drawback being added drag which decreased performance of the aircraft. Other characteristics of the plane includes control cables routed outside the fuselage and engines gauges mounted of the cowlings for easier visibility. These and other features added to the ruggedness of the plane. The exterior design of the corrugated metal was so similar to the Junkers J-1 that in after the introduction of the Trimotor, Junkers sued Ford for patent infringement and won. Ford countersued in 1930 after attempting to export the Trimotor to Europe and lost a second time. 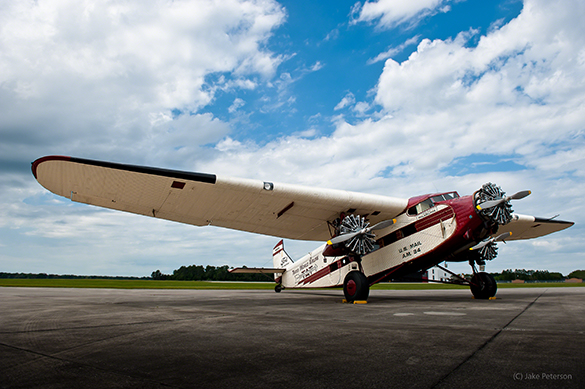 There was many notable flights with the Ford Trimotor including ones with Charles Lindbergh, Amelia Earhart, and Richard E. Byrd. The most widely known flights were made by Transcontinental who flew across the country with day trips by the Trimotor and sleeping berths on trains by night. A trip across the United States at that time would take 48hours. Pan Am used the Ford Trimotor most extensively to Central and South America with the first international trip from Key West, FL to Havana, Cuba.

Two of the most well seen Trimotors today are both hosted by the EAA. There 4-AT-E and 5-AT-B, the 5-AT-B belonging to Liberty Aviation Museum and leased out to EAA, are seen across the country as they are on tour during the summer months showing off the beauty of the early years of flight. The photos in this post are of Kermit Weeks 1929 5-AT Trimotor which can be seen at Fantasy of Flight.