Every photographer has heard of the rule of thirds. It’s one of the first things that we are taught in photography in order to achieve a good photograph. You need a foreground, middle ground and back ground, roughly 1/3 of the photograph is taken up by each of these. As we progress with our own photography we learn how we can bend around that rule to come up with more interesting compositions that still achieve success. 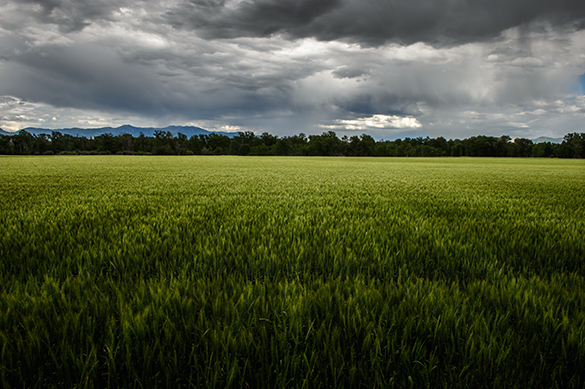 Usually with my landscape images I either show about equal proportions with the earth and the sky or if it’s a dramatic sky, I tilt the camera up to show a sliver of land and mostly sky. Easy ways to make the world look bigger. Well what about the reverse? I was standing by this alfalfa field with the D4 and 24-70 AF-S and after shooting like I normally do, I even made a pano, I started thinking about the grass. The skies were great but I liked the grass more then skies. The light on the grass tells just as interesting a story as the sky does. Since the Gallatin Valley is known for all the farms and ranches it’s also a culturally important feature to include as well as aesthetically. With a little help in Adobe Camera Raw to put on the finishing touches, this image was done. Is it wise to have so much foreground in any one image? I really don’t know, but I’m going to keep testing it until I come up with an answer.