My apologies for the tardiness of this well deserved blog post. During the excitement of Photoshop World I had forgotten to get this post finished. Today is a very important day and thankfully as I have been reading online many news outlets have picked up the story today and made to sure to pay tribute and honor to those that fought in WWII because today is the 70th Anniversary of VJ Day. VJ Day of course standing for Victory Japan, the day that it was announced that the war in the Pacific was over, Japan had surrendered. Now due to time zones, it was August 15th in Japan that they officially surrendered and it was September 2nd that the official treaty was signed on the USS Missouri. It was August 14th however that the news broke across the U.S and the Pacific Islands. It is August 15th that the day is honored in the UK and September 2nd is the day that it is recognized by the U.S. 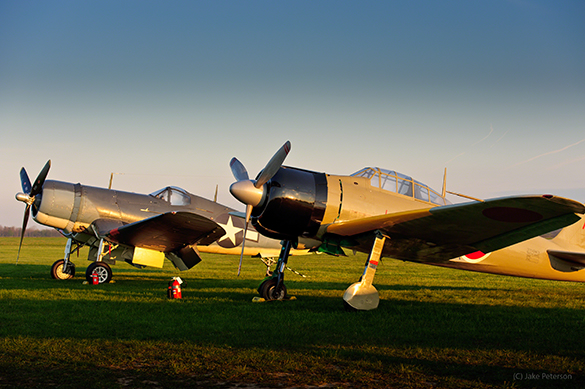 In honor of this day I thought an image of two of the most iconic aircraft to fight against one another in the Pacific theater wold be appropriate. Both of these aircraft are part of the Texas Flying Legends Museum. This A6M2 Model 21 Zero and FG-1D Corsair were adversaries between 1943-1945. Dozens of pilots became aces as they fought one another in fierce aerial battles. Many planes and pilots were lost during these encounters. Today they are seen as part of our history and our heritage.