They sure got the name right with this one! I don’t know if it’s the size, shape or color of this aircraft but the name really does fit this fighter. Despite the affectionate name given to it by American Service men, the Boeing P-26 Peashooter was the first all metal production fighter and first pursuit monoplane used by the United States Army Air Corp. It’s first flight was in March 1932 and it was retired by the Guatemalan Air Force in 1953. Despite the obvious drawbacks of the aircraft: fixed landing gear, open cockpit, wire braced wings, the Peashooter remained in service for the U.S until 1941 in the Philippines. 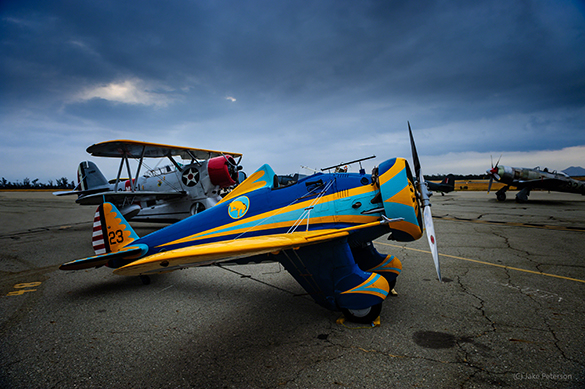 While the Peashooter had some advantages the external technologies made the aircraft quickly outdated. The Boeing Model 248 was funded by Boeing using Army Air Corps engines and instruments to build the proposed design. The Model 248 had a fast landing characteristic which was corrected by adding flaps. Three prototypes under the designation XP-936 were built. Despite the flaps, XP-936 was difficult to land with it’s short nose and fixed landing gear, the plane had a tendency to flip over forward, thus injuring pilots. The Model 266’s (P-26A’s) were built with armored, taller headrests to protect the pilot. 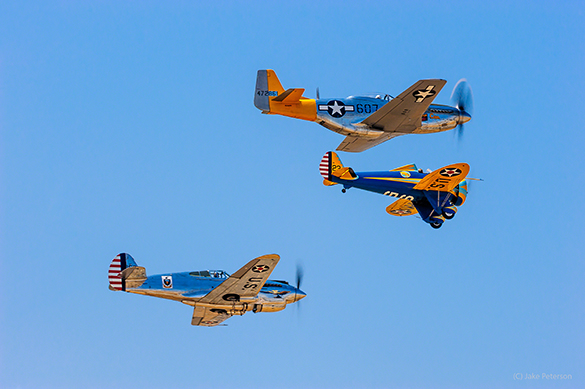 The P-26B had a fuel-injected Pratt & Whitney R-1340-33 engine but was quickly switched to a carburated R-1340-33 engine with only 2 P-26B’s built and 23 P-26C’s were built. The Spanish Air Force and Republic of China Air Force ordered examples of the P-26C in 1933. By 1935 However the P-26 was already outdated by the Curtiss P-36, Messerschmitt Bf 109 and Hawker Hurricane. Only 151 P-26’s of all variants were built. Today only 2 authentic examples exist. One of those is with Planes of Fame in Chino, CA and the other is in the National Air and Space Museum. Five other reproduction/replicas exist. 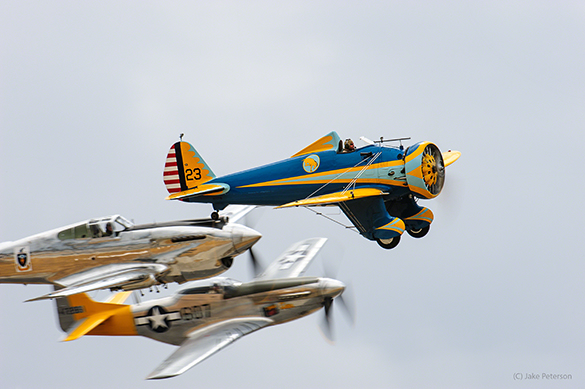 This particular example is Serial # 33-123, P-26A Peashooter from Planes of Fame Chino, CA. This is the only flying example of a real Peashooter left in the world. It’s sister ship is the National Air and Space Museum. 33-123 entered service in the USAAC in 1934 and is one of three Peashooter’s that went in the Panama Canal Zone, along with it’s sister ship. It was acquired by Edward Maloney, the museum founder, in 1957 from the Guatemalan Air Force. It was refurbished to flight in 1962 but completed a full restoration to flight in 2006 by museum staff. It’s seen here flying with Planes of Fame P-51D “Spam Can” and the P-40C of the Fighters Collection.