Out of all the warbirds I have spent time with over the years, there is one plane that I seem to keep coming back to and that’s the Corsair. This plane has one heck of legacy, so much so that I can honestly say that there is no way I’ll be able to write everything about this aircraft in a single blog post. The Vought Corsair (F4U) also manufactured by Goodyear (FG) and Brewster (F3A), was one of the most technologically challenging aircraft to have been designed during WWII. The original purpose was to be used as a carrier based fighter but due to landing issues to was not accepted for carrier use until late 1944 when the landing issues were solved. In late 1942 the Corsair was given over to Marine units who operated mostly off of land bases where the landing characteristics weren’t as much of a problem and who desperately needed an upgrade for the F4F Wildcat. Once the later models were delivered which solved issues with the landing approach, bird cage canopy, landing gear and tail hook, the Corsair became a mainstay for Navy and Marine operations. The Corsair continued to fly during the Korean War as a fighter bomber and flew for over thirty years throughout several countries finally being retired in Honduras in 1979. 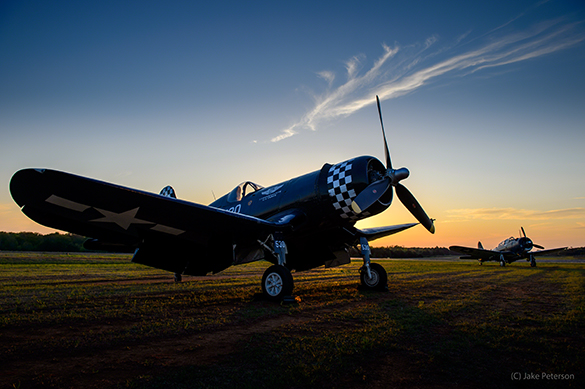 In 1938 the US Navy Bureau of Aeronautics proposed the need for faster and better performing single and double engine fighter aircraft. The call was made for better armaments in both guns and bomb carrying capability as well as better stall speed and larger range. Vought was given the go ahead in 1939 to produce the prototype XF4U-1 BuNo 1443 which was equipped with the Pratt & Whitney Double Wasp twin-row, 18-cylinder radial engine, measured at 1,850hp. It was the first airframe to have a double wasp engine equipped. The first flight was made by Lyman A. Bullard Jr. on 29 May 1940. The flight was a success except for the brief landing due to a trim tab failure. On 1 October the Corsair was the first single engine American fighter plane to fly over 400mph in level flight. The P-38 Lightning achieved the same success in January-February of 1939.

Seen above is the FG-1D Corsair and SBD-5 Dauntless Dive-bomber of CAF Dixie Wing in Atlanta, Ga. During WWII the Corsair would often provide top cover for dive-bombers as they made their attack runs during Naval battles. CAF Dixie Wing is home to one of only two surviving veteran SBD’s in the world. The SBD is of historical significance having been used throughout the Pacific theater during several major Naval battles including the Battle of Midway in which four Japanese carriers were sunk, thanks largely due to the SBD’s. While the Corsair did not come into carrier use until after Midway having these two allied planes together is a rare piece of our heritage. 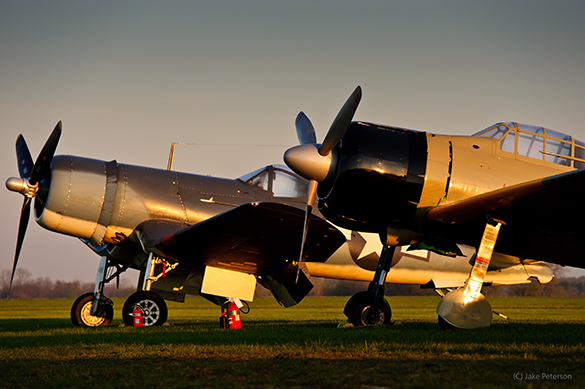 The US Navy accepted the Corsair in 1941 with a contract of 584 XF4U-1’s in April. It was a monumental achievement for Vought and would later prove to be a so massive undertaking that work would be done by Goodyear and Brewster in order to meet demands. The first F4U-1 performed it’s initial flight in June of 1942. The plane was given the name “Corsair” after one of Vought’s earlier aircraft the O2U Naval Biplane which also carried the name. The pilots that flew the Corsair had several other names for the plane including: “hog,” “hognose,” hose nose,” “bent-wing widow maker,” but the Japanese knew it as “Whistling Death.”

One of the most unique and advanced features of the Corsair it its gull wing design. It was an incredibly advanced feature that no other fighter at the time had achieved. In order to provide enough clearance for the 13ft 4in prop, the landing gear had to be long enough but the plane still had to have folding wings that weren’t too long for carrier use. The gull wing was the answer. It provided enough space without making the landing gear longer as well adding enough support for the wings to fold up. The Corsair was also the first US Navy plane to have wheels and struts to be enclosed inside the plane during flight. Oil coolers were mounted inside the
anhedraled wing next to the supercharger air intakes, with slits in the protruding wing as opposed to scoops. This allowed a more stream lined and cleaner aircraft. Each wing was also home to three .50 Caliber Browning machine guns.

Despite the achievements of the Corsair it still was unusable for Carrier operations due in part to the many complexities of the aircraft and the simplicity of the F6F Hellcat which was already in service and aboard carriers. After several changes were made to the Corsair including: removal of the birdcage canopy, fuel position, armaments in the wing, stabilizer on the port wing, tailhook assembly, armor plating for the cockpit, pilot seat being moved back 32″ and several other changes, the most notably being the approach pattern used by the British for carrier landings, the Corsair finally saw active US Navy Carrier operations in 1944. At this point the Corsair already had a fearsome reputation having been used over the previous year by Marine units on Guadalcanal against the Japanese.

Two prime examples of Pacific Theater fighters are the FG-1D Corsair and the A6M2 model 21 Zero. Both of the aircraft seen above are part of the Texas Flying Legends Museum. Both of these planes are amazingly restored aircraft with the Corsair having won Grand Champ Warbird Restoration at EAA Airventure Oshkosh a few years ago and the Zero being acclaimed by aviation historians and engineering experts as one of the most accurately restored Zero’s in the world. 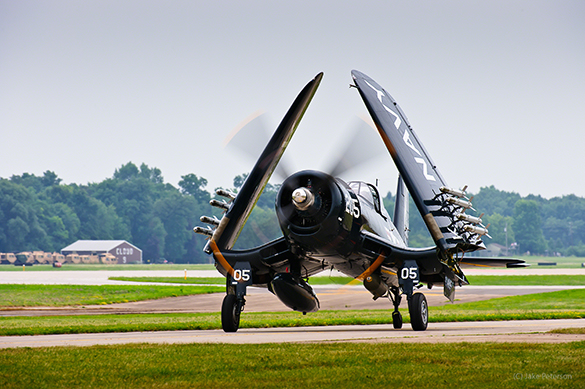 After the Navy and Marines got used to flying the Corsair both fell in love with the plane. Despite the technical issues of the advanced fighter the benefits outweighed the concerns. The Corsair proved to be not only a good fighter but also a good bomber. It was discovered by VF-17, the Jolly Rogers Marine Squadron, that with a couple of modifications the Corsair could be used as more then just a land based low level bomber. The plane was rigged with a special bracket that could release a bomb at a desired speed and height. The pilot was then able to “skip” the bomb along the water until it hit a ship. This engineering triumph led to several more of the devices being made so that the Corsair would be used in anti shipping roles as well. The Corsair would go on as a night fighter and photo reconnaissance. The planes value as a fighter/bomber was used heavily during Korea as this F4U-4, seen above, is decked out with rockets, bombs and extra fuel tank in honor of Thomas Hudner, Medal of Honor recipient in his effort to save his wingman who went down during one combat mission in Korea. 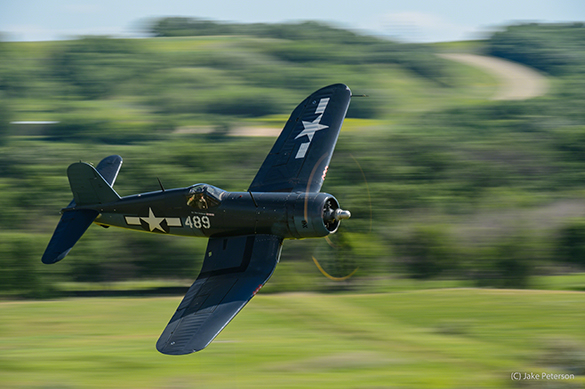 Despite its long history of technical issues, the Corsair in a very short window of time became known as a fierce adversary. It was a well respected plane by both allied pilots that flew them and the enemy planes that flew against them. Many aviation enthusiasts know that while there are only a handful of flying corsairs in the world each one is quite the the sight. Since there is so much more history to this plane, I think I leave it here with a definite to be continued.