There is one aircraft whose silhouette when seen flying is so easily recognizable that it brings out a feeling of freedom to anyone that witnesses it. It is one of the most iconic aircraft of WWII in part because hundreds of them took to the skies during the bombing campaign in Europe and the Mediterranean. Needless to say I will not be able to write everything there is to write in a single blog post about this plane. For those that haven’t guessed yet or for those who haven’t looked ahead at the photograph, then the plane I am talking about is the B-17 Flying Fortress. Today only a handful of flying examples exist of the once 12,000 bombers built. They can be seen around the country at various museums and airshows as one of the highlights of the event. With an impressive wingspan of 103ft 9in and a length of 74ft 4in the B-17 stands alone as one of the largest bombers built during WWII. 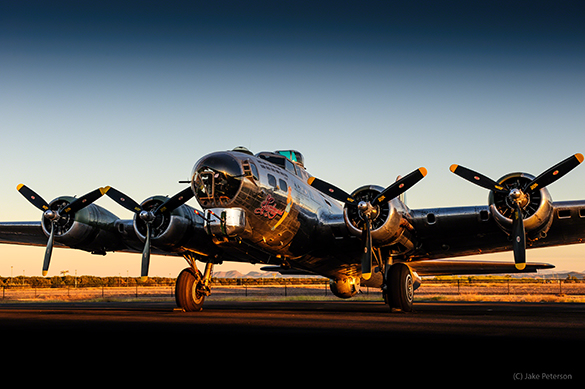 The B-17 was a bomber built on the call of the United States Army Air Force for a new high altitude precision bomber. Boeing initially lost the contract in the 1930’s due to the prototype crashing but because the B-17 outperformed it’s competitors and order was placed for thirteen more planes. On July 28th 1935 the first model 299, preclude to the B-17, flew and Richard Williams a reporter for the Seattle Times coined the phrase flying fortress which Boeing instinctively trademarked. The model 299 was the first aircraft in the long line of changes to be made in creating the B-17. While originally built with five 0.30 caliber machine guns, a 4,800lb bomb load, and powered by four Pratt & Whitney R-1690 “Hornet” radial engines, the model was a leap forward in heavy bomber engineering. In August 1935 it flew from Seattle to Wright Field in nine hours and 3 minutes at a cruising speed of 252mph, way ahead of the competition. While the model 299 crashed due to pilot error, the USAAC was impressed and purchased more of the then known YB-17. 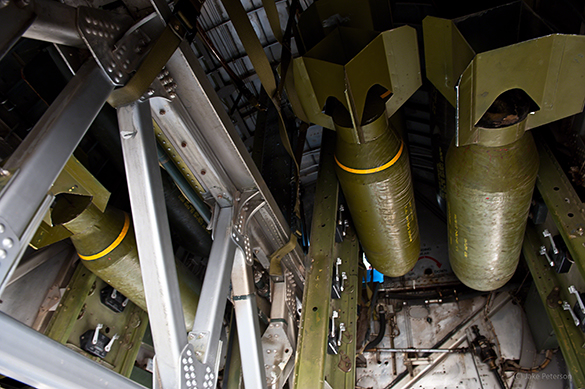 The thirteen YB-17’s were upgraded with four Wright R-1820-39 Cyclone engines instead of the Pratt and Whitneys. Many other upgrades were also made including a checklist to before takeoff in order to prevent any further accidents like the ones involving model 299. The thirteen YB-17’s were delivered to various branches throughout the east coast for testing as well as several places on the west coast. One mission of three B-17’s were lead by lead navigator Lieutenant Curtis LeMay to photograph the ocean liner Rex, 610 miles off the shore in the Atlantic. It was huge success and made many papers. Opposition of the B-17B faded and it slowly was being purchased from 1937 onward. 155 were in Army service between January 1937 and November 1941. After the attack on Pearl Harbor everything changed and orders were being placed with rapid succession. By the end of WWII the B-17 was the most produced heavy aircraft under allied control. 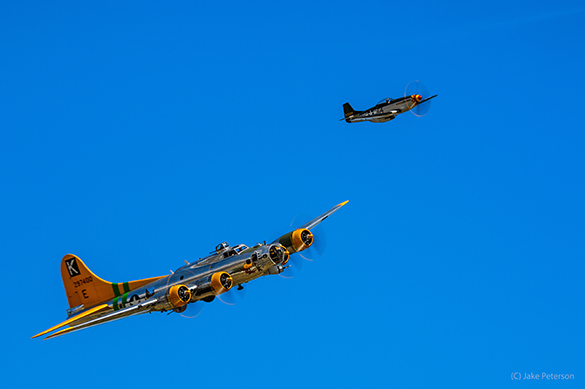 The Flying Fortress was known for many things, it’s ruggedness, it’s firepower and it’s reliability. The plane slowly evolved throughout the war in Europe but the mission never did. Everyone that went up in a crew on a B-17 knew that there mission was to bomb the enemies supplies shortening the war effort. Many howling missions were had over France, Belgium, Austria, Romania, Italy, Japan and of course Germany. Everything from ball bearing factories, to tank factories, aircraft assembly lines, railway yards, marshaling yards, oil refineries and more were bombed in an effort to shorten the length of the war. Seen here is a mustang flying cover for his big buddy while the Fortress is on route to his mission with his Little Friend cover. Over the course of the evolution of the bombing campaign, came the evolution of tactics. At first flights were held close enough to Britain that Spitfires, P-47’s and P-38 Lightnings could provide cover for the B-17’s. However, as the bombers moved inward towards Germany and the range got further and further away from home bases a new type of aircraft had to be developed to provide top cover. The Mustang was the answer. I mention this because of the significance these two planes played together. A post on the mustang will have to wait till later however. 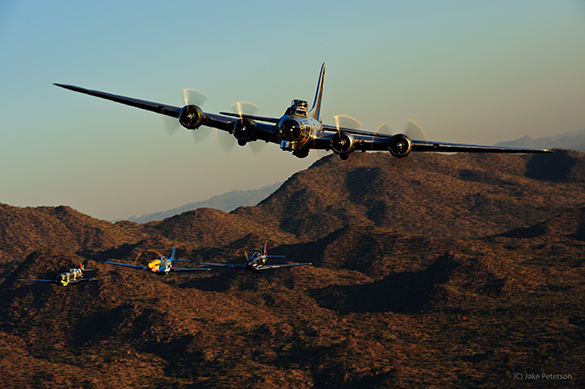 The B-17 went through a series of stages and like any new weapon there were disagreements on how to use it. The USAAC under General Henry Hap Arnold was determined to prove that precision daylight bombing was the only way to win. British Royal Air Force flew night time bombing campaigns and for several months early on in the war B-17’s were used in some of those missions being flown out of bases in England. After many months of experimenting and seeing little result to industrial works the USAAC decided to suspend any further night raids with the B-17. The fight for the B-17 would go on for the rest of the war between the RAF and USAAC over which use of the plane was better. The Eighth Air Force based out of England and commanded By General Ira C Eaker went from less then a hundred B-17’s to over a thousand during the course of the war. He helped to bring together the various groups, squadrons and personnel to make it what it was. During this time the 15th Air Force based in Italy and commanded by Jimmy Doolittle was established in 1943. It’s purpose was to bomb oil refineries and other industrial targets in southern occupied axis countries. In January 1944 until the end of the war Doolitle was put in command of the Eight Air Force with one goal, to attain air superiority. By this time a sizable blow had already been delivered but Doolittle’s change of orders for all fighters to go after fighters and not stick with the bombers changed many things from that point on. During the this period of transition a new structuring was made with the VIII Bomber Command, VIII Fighter Command and VIII Air Support Command along with the Ninth Air Force were brought together and formed the United States Strategic Air Force. General Carl Toey Spaatz was in command. Although this never changed the mission of the B-17 it did changes in how the plane would operate. 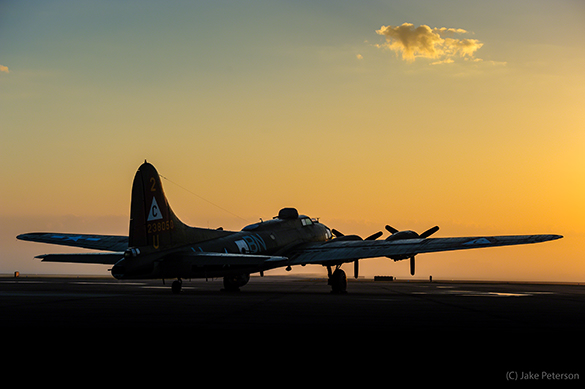 The B-17 wasn’t just a plane but a home to many young men. Ten men would fly in various positions throughout the plane in extreme cold temperatures and under severe conditions. Everything from flak, to fighters to seeing other planes go down had to be endured when trying to complete a mission from England to occupied Europe. One way moral was increased was by giving an assentive for crew members that if they were to complete 25 missions they could go home. That was later upped to 30 mission as the the war was getting closer to the end. This had little effect on the men as most knew that the life expectancy in those early years was not even half the number of required missions. During the first couple of years of the bombing campaign the stakes were high and so were the mortality rates. The bravery that these men showed to climb back into the same plane over and over again was extraordinary. Many great books, films and articles have been written by the survivors of these missions. I highly recommend going out and purchasing at least one. For now this post will have to do but rest assured more is to come.