Yesterday I talked about how I was going through the Gallatin Mountains, working a particular stretch of highway that goes through a canyon as it makes its way to West Yellowstone. Well that stretch goes through some beautiful areas along the Gallatin River and the river is home to many species. As I was driving back home I saw this Bald Eagle fly off working the river trying to find a good fishing whole. I was hoping she would stop and sure enough she did and it just so happened to be next to a pull off. 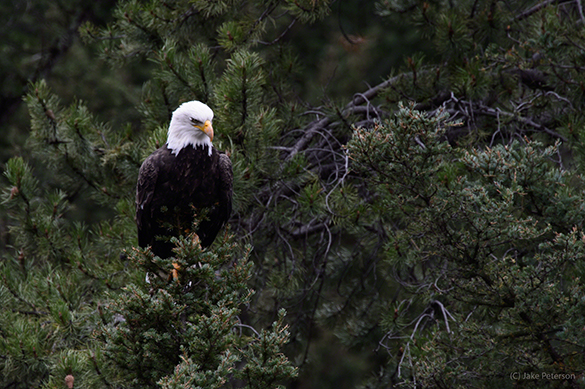 She choose, what I thought, was a rather funny perch. It was the top of a pine tree that was blowing horribly in the wind. She almost lost her balance a couple times. Nevertheless, it was a nice clean line of sight with a rather busy but good background. Now at this point it was dark, it was windy, cars were driving by, not ideal conditions for setting up the tripod. The next best thing was to use the car for a blind. Now I love my Tacoma, but man is it hard to get comfortable with a 600 sticking out the window. I made it work and with the D4, 600f4, TC-17E II, and high speed crop, I was able to get some nice shots. Now if you’ve ever worked with birds before then you know that they don’t always hold still. Well this one Baldy must have thought the river below looked good because she was there for a while, this allowed me to play around a bit. Eventually she did fly and I thought that was it but as luck would have it she flew thirty feet down river and landed in an even better tree. 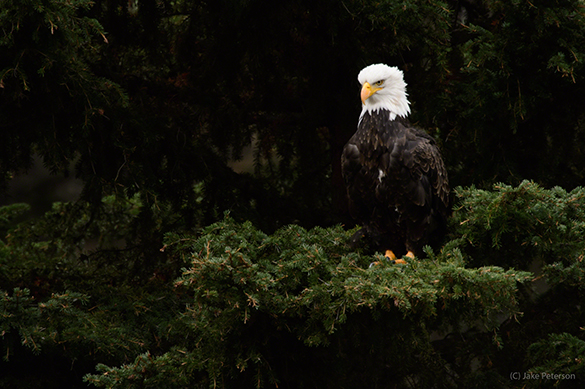 Bald Eagles are not an uncommon species, they can be found all over the US. What makes photographs of them unique is the background. When she landed on this pine bough, I was ecstatic! Not only does the pine branch give a natural reference to where she lives but thanks to how the light works over those branches, the background basically disappears. In order to get this look I had added in exposure compensation of -3.0 stops. Green is naturally very brilliant. Even at -1.0 it looks hot. Stopping down took advantage of the natural light on the edge of the branch and hiding everything behind the eagle. The great thing about Bald Eagles is there head is white. Easy for the eye to go to it. Downside is, because it was dark, almost sunset, windy and cars driving by I had to crank up the ISO to get a faster shutter speed but stop down in order to bring out the details in the feathers. Now usually you have only a few second maybe a minute or two to think about these things before the subject flies away. That’s one of the things I loved about this subject, she stayed put for an hour! 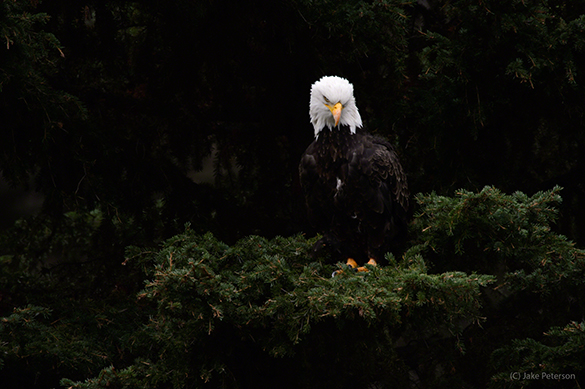 Now I’ve always been one that looks for the irony in situations and that morning I had just finished reading Jay Maisel’s book Light, Gesture, and Color. It seemed fitting to spend the afternoon working with a Bald Eagle. The light was boring, it was flat light which worked to keep the contrast down as it was overcast but added no warmth or brilliance. In this situation it worked out pretty well. Color was great! The second perch she was on made for a great composition as the dominant color was black making the areas that weren’t black pop. Finally gesture. Now due to all the variables that were going on I had to rip the shutter a few times to make sure I got a good image. Every time I did this she looked at me or she was looking at where that noise was coming from. This particular time she was looking at the river but after having just ripped the shutter I couldn’t help but get the feeling she was saying something along the lines of, “Don’t you have enough shots of me already?!”