We are visual storytellers and sometimes the realities of what is going on at the time the photograph is taken are hard to translate in an image. Temperature is one of the realities. While temperature does effect color it’s still hard to see the difference in just how cold or how hot it was when the image was captured. Now our minds are really good at filling in these blanks with a little help. It goes back to the psychology of the human mind. 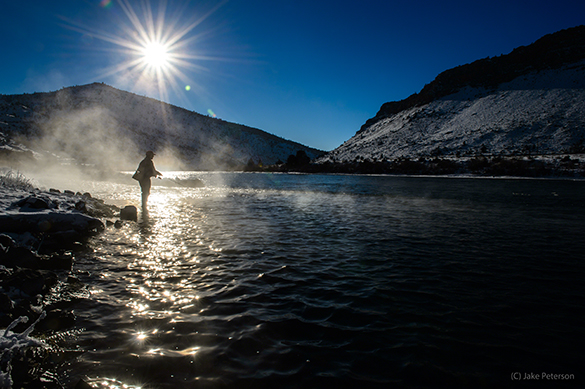 While I was out at the river I had sometime to play around with the great landscape available. It was cold the night before as in the negatives cold. That morning it had warmed up to 16 degrees. The results was great hoarfrost and beautiful sunshine. Now this one spot has a natural spring that is warmer then the river. When the two waters meet it creates the steam. It was still so cold that it was actually warmer to be standing in the river then outside the water. Well I love steam. Steam is a great aspect of winter photography that I exploit as often as possible because it’s dramatic and it gives a true feeling to that temperature. I told my friend to go stand by the steam as I fired off the shutter. I did two basic setups, one close in so that there is no sunburst and then wider so to get the sunburst. I was shooting with the D4 and 24-70 AF-S at F/22 to get the star burst effect from the sun, otherwise it would’ve been a bright white dot. This was actually a great day not to have clouds because it brings out more of the color in the image, rather then the drama that would’ve been there if there was clouds. Understanding these elements and how to use them is essential when it comes to winter landscape photography which can be difficult with the overwhelming amount of contrast between light and the cold.