Well I don’t normally write about jets in this category, mostly because my knowledge on the jet age is a little bit more lacking then with antiques and warbirds, but this particular one has always caught my attention and it just seemed like it was worth adding to the selection. The F-86 Sabre, also known as the Sabrejet, was one of America’s most widely acclaimed fighters to have ever been built. The Sabre first flew in October 1947 and was not the first jet aircraft built in America after WWII. That honor goes to the P-59 and P-80. However, F-86 was the front line jet fighter to be used in the Korean War. 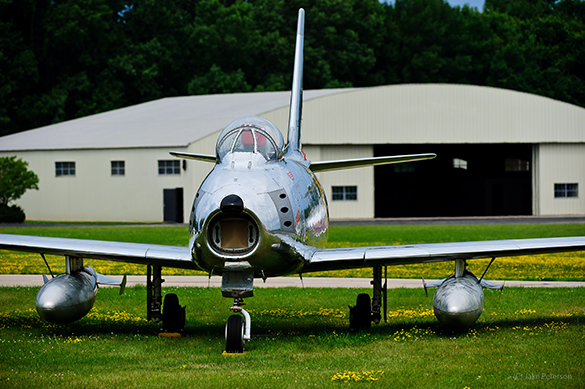 The F-86 Sabre was America’s first swept wing, transonic jet fighter. It was developed by North American Aviation for the USAAF during 1944. North American had previously proposed to the U.S. Navy the FJ-1 Fury. The FJ-1 Fury had the same straight wing as the P-51 Mustang but for the USAAF requirements modifications had to be made. The plans for the FJ-1 Fury were used as a blueprint, with modifications made to performance and weight, to create the XP-86. The original prototypes were slower then the 600 mph mark and thus North American were afraid they would loose the contract to rival companies. North American then had a huge breakthrough being one of the first aviation companies after WWII to use German aviation science in swept wing design. Going back as early as 1940, German aviation companies started experimenting with swept wing technology to gain greater speed. One example of this German technology was the Me 262 jet fighter. This data was then used to help design the F-86. 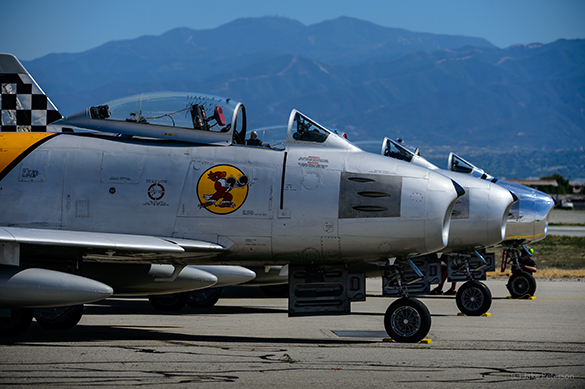 The first F-86 rolled off of production on August 8th, 1947 and the maiden flight was October 1st, 1947 at the hands of George Welch. 9,860 were built between 1947 and 1994, when it was retired with the Bolivian Air Force. The F-86 was built in a series of variants to fill multiple roles including as a fighter, interceptor and a fighter/bomber. They were equipped with a combination of six 12.7mm M3 Browning Machine guns, four 20mm cannons, 2,000lbs of bombs, napalm tanks and external fuel tanks. Rockets also were used during Korea. As the role switched the type of armament each plane would carry changed.

One of the F-86’s major advantages was it’s speed due to the 35 degree swept wing design. On 1st October 1947, many believe that George Welch broke the sound barrier on its maiden flight in a dive. The first official record was set in September 1948 at 670mph in a F-86A. However it was Chuck Yeager who officially set the record in October 1947 with the Bell X-1. Jacqueline Cochran became the first woman to break the sound barrier on 18 May 1953 in a Canadair built F-86 Mk 3. 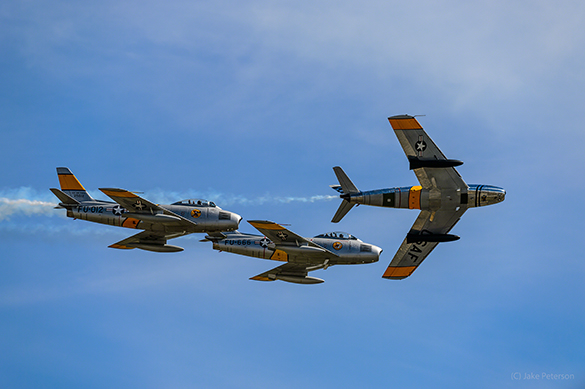 The F-86 gained much of its fame during the Korean War where it was the United Nations primary front line fighter against the Soviet MiG 15. The two planes were very equal in performance, with the early F-86A’s being inferior in many ways but by 1953 the F-86F’s were more on par. The main difference was in diving capabilities and past super sonic speeds where the MiG had disadvantages. Another crucial factor was the pilot. American pilots flying F-86’s mostly flew in WWII and had stayed in the Air Force after the war. The North Korean and Chinese pilots had a lack of experience in top of the line fighters. However, early in the war many Soviet MiG’s were being flown by WWII pilots as well. Both sides had several aces by the end of the Korean war, with 792 MiG’s being credited shot down and much dispute over of the number of Sabre’s shot down. While the original number claimed was 78, giving a kill ratio of 10:1, recent studies have shown that more then 600 Sabre’s were shot down providing a more accurate ratio of 1.8:1. Exact figures are impossible to prove. 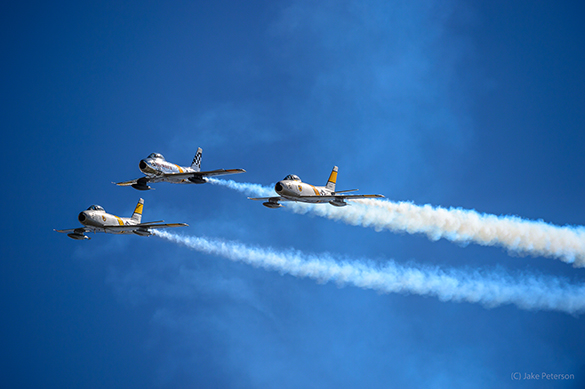 The F-86 went on to serve with the U.S. Air Force throughout the early years of the Cold War. As new fighters became available the F-86 was transferred to the Air National Guard of Allied Nations until 1970. The F-86 also entered the hands of numerous Air Forces throughout the world before retirement in 1994.

Today the F-86 is a highly regarded and collectible Warbird. They can be seen all over the country while the most prominent displays being shown by the Bremont Horsemen Aerobatic Team, the worlds only P-51 Mustang, P-38 Lightning, F4U Corsair, F8F Bearcat, and F-86 Sabre formation aerobatic team. The three group F-86 Sabre shots seen here are all of the Horsemen as they performed there routine at the Planes of Fame Airshow two years ago.