Ever since the new boundary warp came out in ACR a couple weeks ago, I’ve been wanting to play with it. I really enjoy making Panos because they tell so much. The story is just so expansive with a Pano and at the same time you can really be specific when choosing what to add. With the Merge to Panorama in ACR it’s become very easy and enjoyable to make Panos and thus capture the world around us. 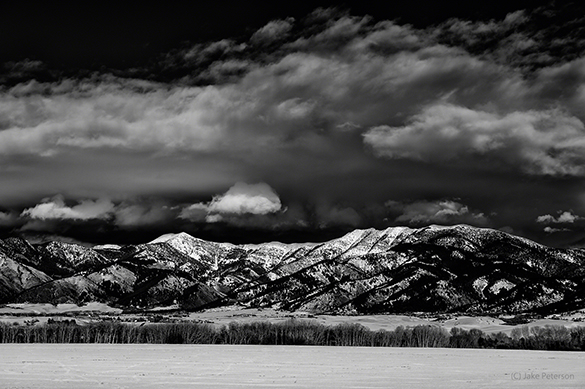 I was out Saturday doing the one thing I enjoy the most when not working on a specific project, cruising. I’ve found more great photographs by driving around, with a camera on my lap, watching the sky and the light then anywhere else. That’s the best part of being a photographer is discovering new places. This place I knew about but hadn’t shot there because I needed the right sky. I didn’t quite have it that day but there was one great cloud and that’s all it took.

To see the pano bigger click on the Image.

Now the top shot was the first image I took but I knew the moment I stopped this was a Pano opp. Using the D4 and 24-70 AF-S, I closed all the way down to capture as much detail as I could because when you’re doing a Pano, it’s going to end up really big! You want that detail if you are ever going to print it out. This was six frames that I then merged in ACR and converted with SilverEfex Pro. Now on this image I tried boundary warp to fill in the edges that weren’t there when the images were merged together. Normally I use Auto Crop which normally makes the Pano narrower, one of the disadvantages of that method. That didn’t happen with Boundary Warp. Now I was wondering if it would look off anywhere but it didn’t. Perhaps that’s because this was a landscape and there were no definitive lines, like with a building, but it’s definitely something I’m going to have to keep playing with and studying.