One of the first jet aircraft that I was introduced to was the de Havilland DH.100 Vampire. It was the shape of the cockpit and the twin tail boom that caught my attention at the Reno Air Races that originally caught my attention. This particular jet has flown at Reno for several years, hence the 67 race number. The Vampire was the second jet fighter in the RAF, after the Gloster Meteor. It was under development during WWII and first flew in 1943 but didn’t enter service until after the war ended in 1945. Over 3,300 were built for use in the RAF, Royal Navy and under license to other nations. The Sea Vampire, the Royal Navy variant, was there first jet fighter for carrier use. 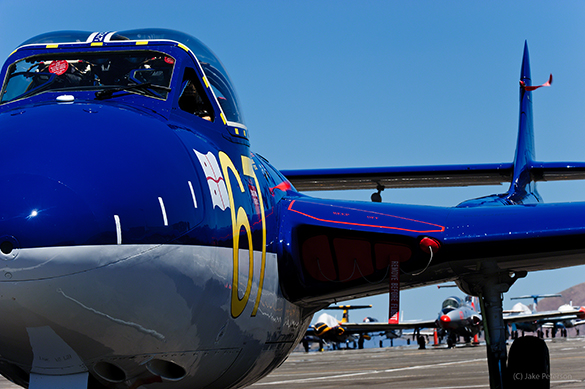 The Vampire was a de Havilland bird from the start. Designs were based off of other planes including the Mosquito. Molded plywood, a trait of de Havilland, was used throughout much of the prototype. Due to the single low powered engine, the early examples of the Vampire were considered experimental only, thus giving more favor to the Meteor which was already in production. After Frank Halford’s H.1 (later known as the Goblin) engine came out, the possibility of a single engine fighter became more practical. De Havilland built an all metal tricycle gear aircraft to accommodate the H.1. Due to many design changes, testing and other demands on the factory the Vampire never saw combat during WWII. However, 15 variants were made of the Vampire to accomplish multiple tasks for 31 Air Forces around the world. Germany, the Netherlands, Spain and the United States were the only major western powers to not use the Vampire. 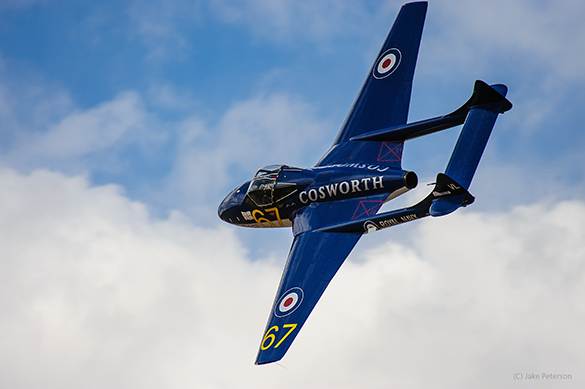 Despite the competition with the Gloster Meteor, the Vampire was produced in great numbers and set many records with the RAF. Among these was being the first jet aircraft with the RAF to go over 500mph, a Sea Vampire was the first pure jet to land and takeoff from a carrier, and in 1948 Vampires part of 54 Squadron of the RAF were the first to fly over the Atlantic. Conflicting reports later stated that a Squadron of USAF F-80 Shooting Stars flying to Germany were the first to cross the Atlantic. The Vampire went on to serve with many countries around the world, creating a rather unique history. Needless to say all of that history cannot be read just here. The Vampire was retired from the RAF in 1966.