I get asked this question a lot and it’s really hard to answer it because my normal answer of, “one that tells a compelling story,” usually isn’t ever good enough. The specifics of what makes a good photograph is always hard to nail down because every photograph is different. 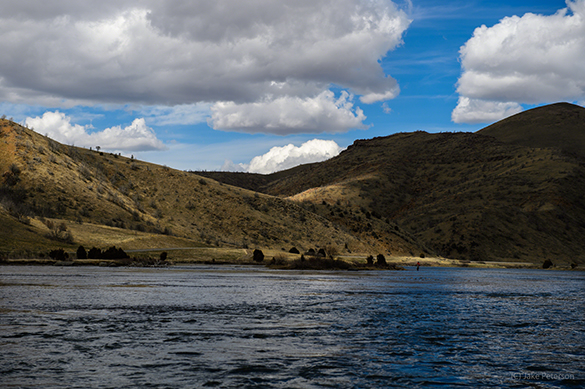 The obvious answer is light but then trying to explain how light makes or breaks a photograph to someone who isn’t a photographer becomes complicated. On that day the answer involved the clouds. Having a beautiful day with nice puffy clouds made it easier to show and example how the light bounces around the mountains creating highlights and shadows. That created drama and drama is certainly a photography term. Going back to what I talked about yesterday with color composition, this one image stuck out to me because of the fisherman in the red shirt. Even though he is a dot in the frame, you can still pick him out because of that red shirt. The clouds reflecting on the water creating a channel of blue sky breaks up the monotony of a single reflection. All of these elements make up a good photograph and what’s more there are still ways to improve it. Then of course that would be a different photograph all together. In the end it comes down to every individual capture being different and having to take each one in account for itself.