Over the last couple of months I have slowly discovered new areas to go shooting certain species. One of the benefits of spending lots of time fishing is you tend to find a lot of bird species. A couple of weeks back I found a very accessible Osprey nest with both adults consistently diving and feeding on bass and perch from the local pond. Knowing it was there and best of all front lit in the afternoon I made sure to go back. 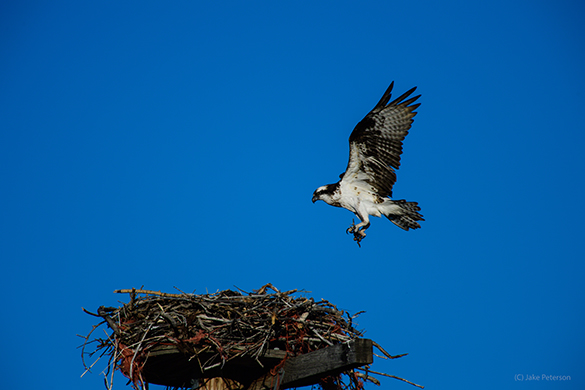 Over the past two months I have been shooting with the D5. It’s certainly a great camera but it does take some getting used too. It’s new auto focus system is just amazing and working with subjects, like Osprey’s flying, being able to track that movement and get a sharp image is important. I was shooting with the 600f4 and TC-17E II with occasionally going into high speed crop. One thing I did notice because of that setup and my older lens is I lost Auto Area AF mode. That’s one of the realities with older and newer equipment. Wasn’t a problem since I could go into group which worked just fine. This is all part of the learning curve that’s important to test before the next big job comes up. 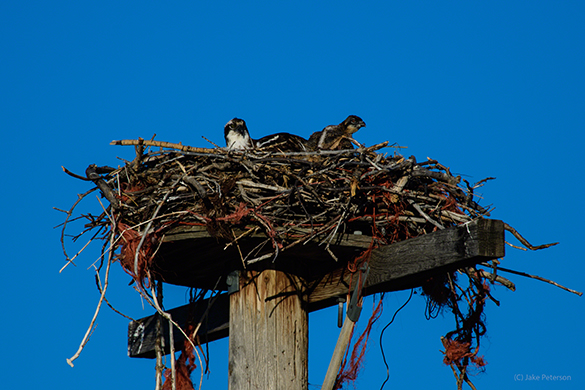 Well it was quite fun watching the parents come in and out of the nest and junior here get up and move around. He’s wast quite active watching both parents and occasionally me. The parents came in and out a couple of times with branches to improve the nest. Now I’m not sure but the way the female kept laying down in the back it sure seemed like there was another chick in the nest but never did get glass on that one. Great thing about nesting birds is once you find them, it’s easy to go back. The important thing to remember is to do your homework beforehand that way you know if it’s safe to be close to the nest without disturbing the process. The photograph isn’t worth sacrificing the welfare of the offspring.