I’ve been using GoPro’s for a couple of years now and they are a very handy camera to have. With their small size, good quality and versatile mounting setups they can be very useful. With my latest aviation project the need to upgrade to the Hero 4 Silver to solve certain issues was a must. The biggest issue, one that has always been on GoPro users minds, is the battery life. Now most people have multiple batteries or the GoPro Backpac which extends the GoPro life. Well having tested the Hero 4 with a backpac for the last 2 days, I’ve found that it’s harder to drain the battery then to fill the card. 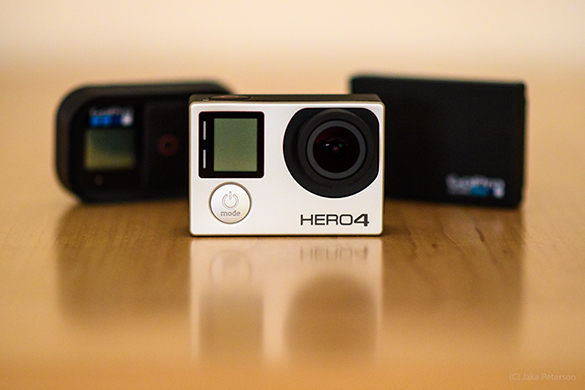 I tested the Hero 4 with a Backpac in a variety of video options, 4k at 15fps, 2.7 at 30 fps and 1080p at 30fps. For each one I used a Lexar 64GB Micro SD card. In each test the GoPro said Full, meaning the card filled, before the battery would die. Now the respective times are 4K 1hour 36mins, 2.7 was 2hours 6mins and the 1080 was 2hours 18minutes. These times were surprising, especially the 1080 but it provides hope for those times when you need to run longer then 2hours. Working with planes often times the GoPro’s will cover takeoff, the performance and then cut out. They don’t always cover the final 30 minutes. Needing to break the 3 hour barrier is important, especially if a flight is delayed. The next step is testing a 128GB card in the GoPro.

The second thing which is really nice with the new GoPro Hero 4’s is that they come with the basic remote. The remote works over the Wifi system and shows the same as the front screen of the GoPro. The remote allows you to turn the whole unit on and off and start and stop. There is a Smart Remote which allows you to change more settings but that’s an extra $80. Having tested the basic remote with the GoPro outside of the house and me being 50ft away, the unit still turned on and off and start and stopped. There is a bit of a delay but it’s over Wifi which is expected. In case you’re wondering the battery with backpac only went down three bars, out of six, with the Wifi on, filled the card at 1080p, and shot for over 2hours. So not only is the unit consistent but it seems that GoPro has done a really good job at making the batteries better.

Finally the touch screen rear monitor. I really like this feature on the Hero 4 because it allows you to change all the settings faster and easier. GoPro was smart about this and added a lock that you have to swipe and hold in order to access the settings. This way you can’t change something by accident. Hero 4’s aren’t inexpensive but if you need them for a project, a second camera, a different angle, or trying to do more with less then you might want to look into them.