I’ve seen a lot of really good sunrises and sunsets but it still gets me whenever a great comes along. While down in Houston, TX a week ago we had one spectacular morning shooting at Ellington Field. It was Sunday morning during the Wings Over Houston Airshow that the skies just lit up! At first it seemed liked it might be a dud but then this pocket opened up and the sunlight was just gorgeous. You couldn’t have asked for better. 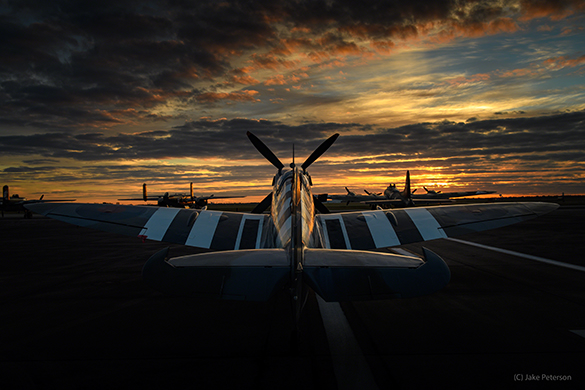 Shooting was a cinch. It was a matter of combining the great light with the silhouettes of the planes. Now the field was littered with planes so the subject matter was quite extensive but I went for the Spitfire for two reasons. First off in the background is a B-17 Flying Fortress. Historically that’s pretty cool to have two allies that fought together in one photograph. Secondly and this is more important, the white stripes on the wings are great for grabbing the viewers attention. Even with the light in the skies your eyes still go to the white which wouldn’t be seen on any other plane. It’s a little detail but it makes a difference in the end.