Once a upon a time these two great planes were adversaries over the skies of Europe. The sleek and sizzling Spitfire and the fastest plane in the sky, or at least at that time. We never got to see the true potential of the Me 262 during combat which is probably a good thing for the allies but those that did surely remember it. In 2015 for the first time in North America we had this very Me 262, a P-51 Mustang and this Spitfire grace the skies over Houston. This year the two enemies were back together again. 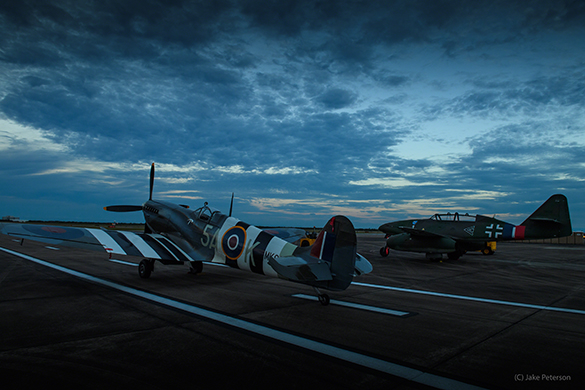 The ME 262 seen here is flown by the Collings Foundation and the Spitfire is flown by the Texas Flying Legends Museum. Both rare planes and rare moment in history to have the two back together again. Photographically the options were pretty slim. With clutter on all bu tone side of the planes, getting a clean shot was next to impossible without using post processing. Using the D5 and 24-70, this is a simple click capturing the brief moment that the planes were together. The next morning the 262 was back home. Sometimes a few clicks is all you get.