Some of the locals in Montana have a tradition of fishing in the winter time. While most go skiing, these crazy few folks are found on the river. While it is certainly a harder time to fish it is also one of the best if you’re patient. There’s often less people and bigger fish which makes for a lot of fun. As one local experienced this past weekend, those bigger fish can be stubborn to land. 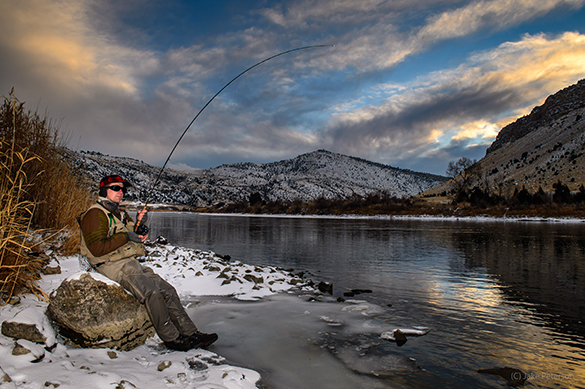 While fishing on the Missouri, Alex here hooked into a carp on his five weight and 6lb tippet. With zero leverage on the fish the battle lasted 90 mins before finally he snapped the line to try and get the fish to move. For those watching it was interesting if not somewhat boring. Thankfully I had my camera. With the snow storm passing through the area, sunset was proving to be interesting in the canyon. The scattered clouds opened up enough to let in some light. I was watching for a while thinking about what I could put in front of the clouds. Alex solved that issue. With the D4, 24-70 AF-S, and SB-5000, I made this quick portrait of him rather exhausted from the battle. For a fisherman this is a all to well known feeling. Hooking into something just too big to fight. For a photographer it is a reminder that not only is patience key but constantly watching your surroundings will yield to the best image.