Grizzlies have always been a species of interest to me and while I have spent many a year in Montana, I have only had a few encounters photographing them but each time has been memorable. Grizzlies come out in the Spring from hibernation, fatten up over summer and then go back to sleep in the winter time. At least in a normal year that’s what happens. If they don’t fatten up enough or if it gets to warm out then they wake back up to forage. This usually isn’t good. They tend to be the most dangerous when they are in forage mode. 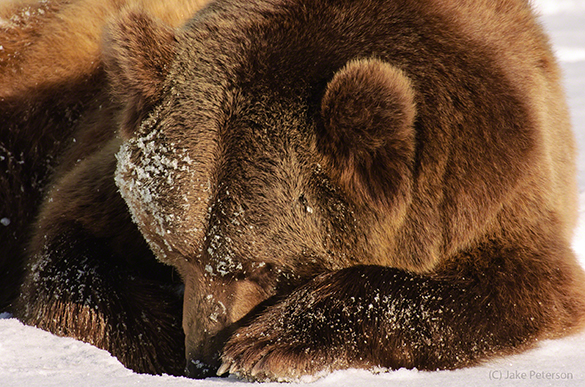 A number of years back I had the chance to photograph a Grizzly outside of Bozeman in the winter named Brutus. He was orphaned as a cub and rescued. He has since grown up to be a rather famous male grizzly bear. Of course the whole time he was being photographed all he wanted to do was dig a hole and go right back to sleep. Now in this instance I was using the 70-300 VR which I wouldn’t normally recommend for working with Grizzlies in the winter because that would mean the bear is too close. A 600 f/4 or 800 f/5.6 with a teleconverter is the best option allowing you to keep a safe distance while also making it possible to get the shots you want.