There are a lot of superstitions that come with photography. Some seem to hold more sway then others but one of them in the wildlife realm is, when you first photograph a species no matter how bad the photo you keep it. It’s the break the jinx shot. The belief is it makes it more likely you’ll have a chance to photograph that species again in the future. Well this is the White-tailed Jackrabbit and point blank it’s a common species in Montana. They are most often seen in the summer time when they are brown. In the winter time they blend in really well with their white coats. The often give away is the black tipped ears that can be seen best from the front. The backsides are white. While they are called Jackrabbits they are in fact in the Hare family in part due to their longer hind legs. This makes them incredibly fast and often hard to work with. 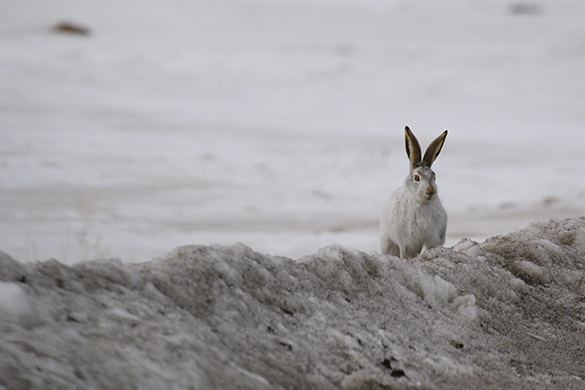 Back to the superstition, the first chance I had to photograph this species was in 2010 and the shots weren’t the best. But it was a start. Seven years later I finally have a little bit better shot but as usual he wasn’t cooperative. This was taken with the D5 and 200-400 VR. If you’re wondering why the 200-400 and not the 600 f/4, well I often drive around with the 200-400 when looking for critters. I didn’t have time to get the 600 out or I would have. While I don’t know if the superstition holds true or not, this is a small improvement and hopefully it takes less then seven years for the next one.