I was very excited about this opportunity! Burrowing Owls can be found pretty widespread across North America but one of the largest populations can be found in Florida. It is actually quite common for Burrowing Owls to nest in front and backyards of people’s houses or in vacant lots around housing areas. As the name states, these birds live underground. They make a burrow to nest in and raise their offspring in. They are maybe 10-12 inches tall and being speckled brown they really blend in. While on eggs one adult will often be on the surface as lookout while the other is on the eggs. At some point they switch spots. They’re a fascinating species and a fun one to photograph. 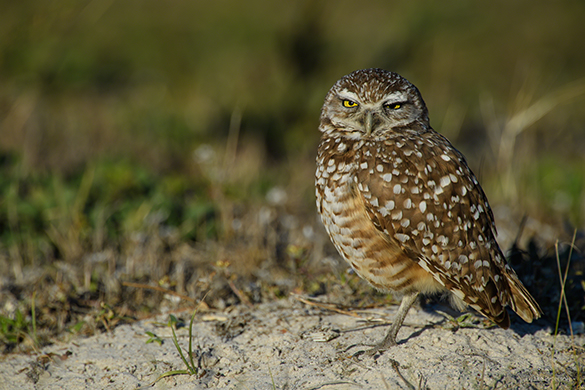 When it comes to working with these guys it’s important to remember two things: get low and watch the background. Shooting high doesn’t work because it not only makes the bird look small it brings out all the detail in the background. Since they bland in really well with that background it doesn’t make for great photos. Getting low helps to blow out the background by making it go into infinity. The birds then pop. Shooting with the D5 and 600 f/4, occasionally with the TC-17EII, helps not only keep a safe distance from the subject but also get rid of the background with a narrow depth of field. This adult spent a lot of time with us as it never switched with its mate. He wasn’t a huge fan of the sun as he kept closing his eyes.